Spitskop - More than just a Waypoint - also a Destination 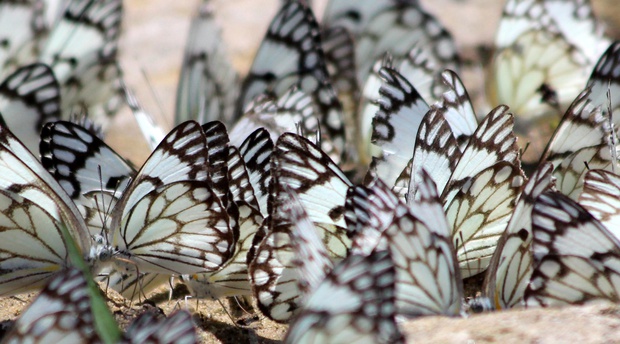 Over the years it has become clear to us that Amohela ho Spitskop Country Retreat and Conservancy is not only a " waypoint" but rather an important resting and feeding stop-over for many birds and butterflies during their long migration travels, both North and South bound.
It is always with joy that we greet each new wave of arrivals and then bid them bon-voyage a few days later.
Refreshed and well fed ready for the next leg of their journey. Some of them really travel a long way.
White Storks from Europe, Abdims Storks from West and north Africa, Amur Falcons from China, Steppe Buzzards from Russia and the Barn Swallows from Denmark. 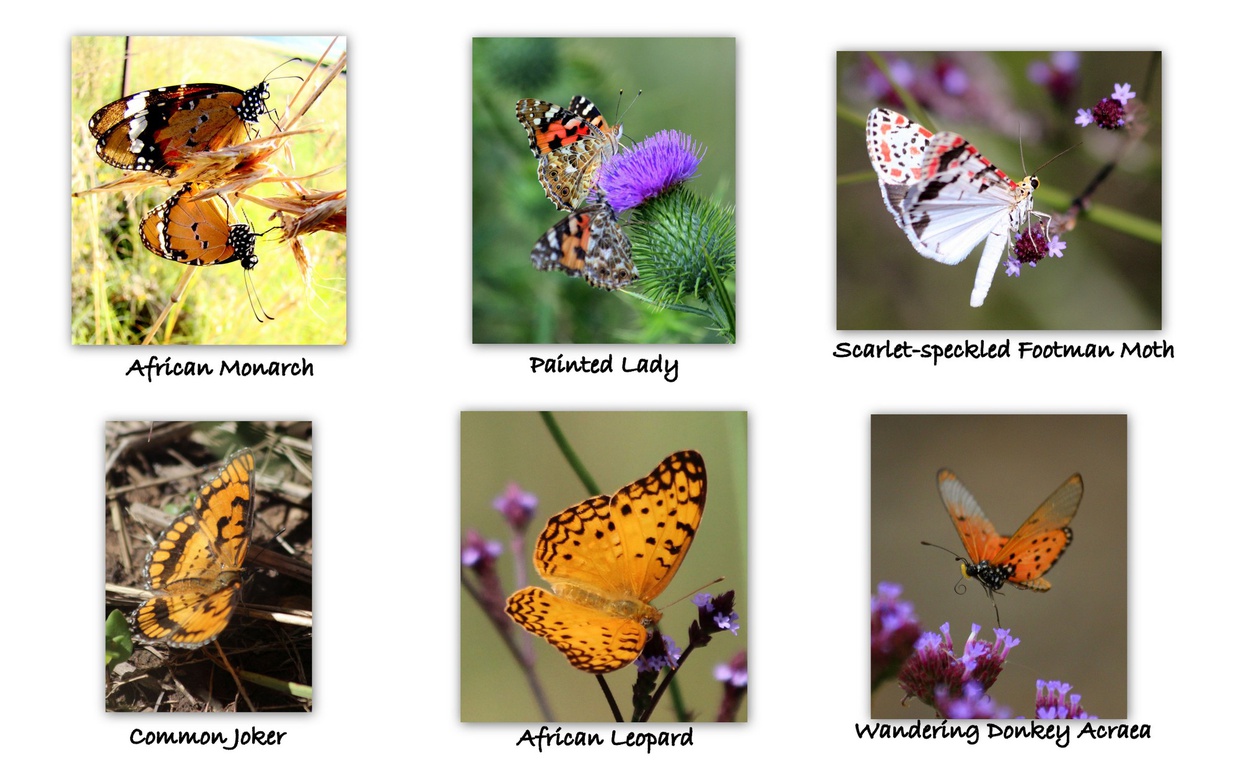 Some are clearly repeat visitors, Barn Swallows especially and we watch them settle into their old nests with familiarity.
The Steppe Buzzards perch on their familiar pylons and perches, Amur Falcons settle on the powerlines.

Then we have literally millions of butterflies, mainly Brown-veined Whites from the Karoo and joining them along the way we have lots of African Monarchs and Meadow Whites. Their arrival seems to attract many other species and Spitskop becomes alive with aerial jewels flitting and feeding between our many wild plants -  this butterfly delight can last 5 or 6 days before they move off .

On a sunny summer's day towards the end of January 2020, the heavens were suddenly filled with butterflies - thousands and thousands of them - mainly Brown-veined Whites. They floated over us to settle on garden flowers and then spread out over Amohela ho Spitskop to feed on our abundant wildflowers. 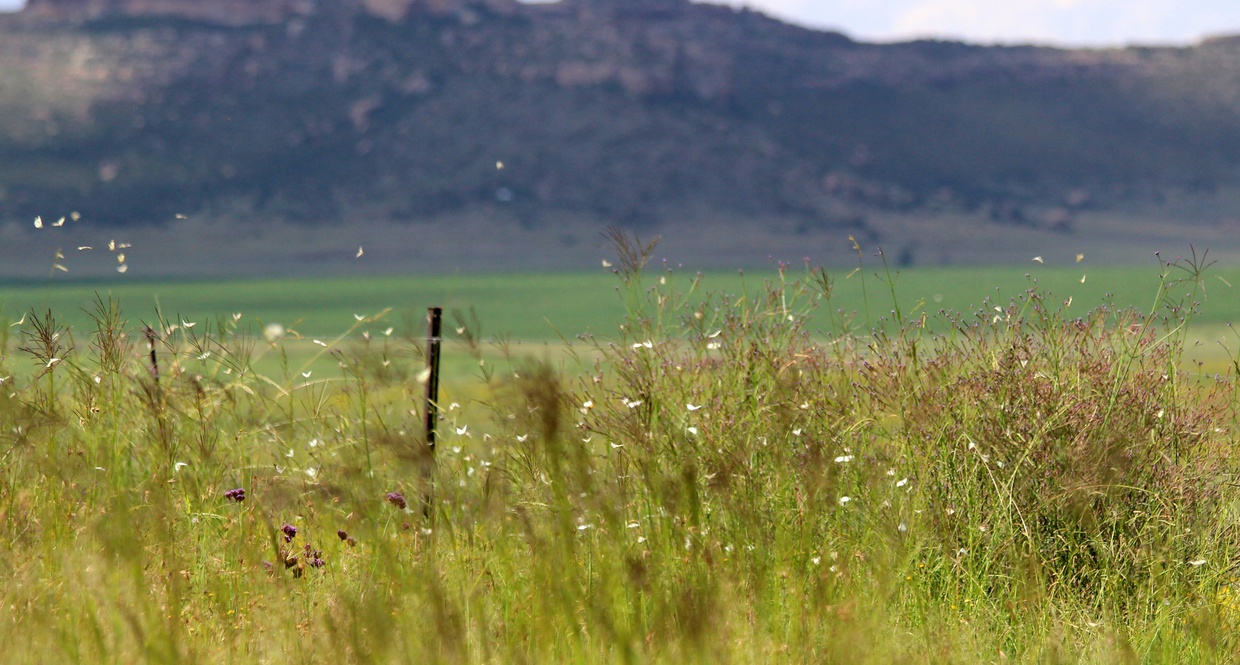 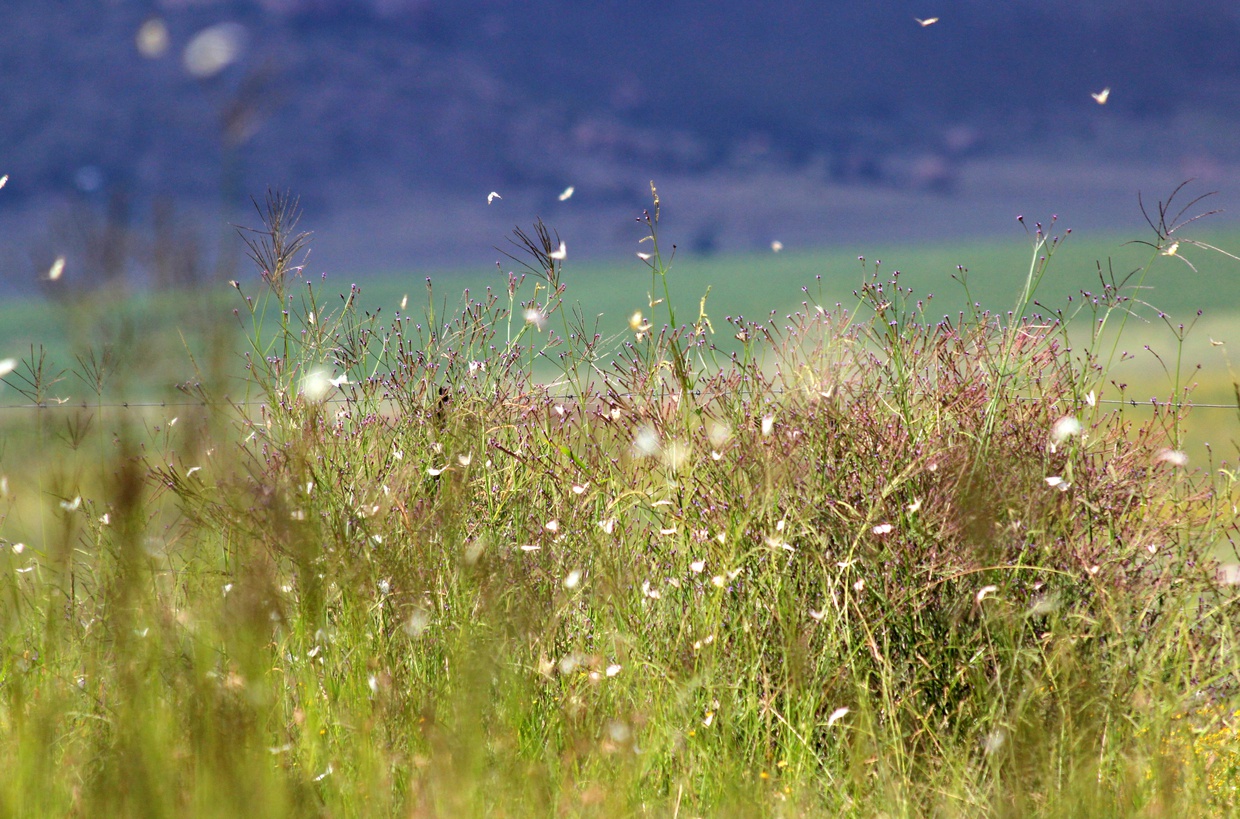 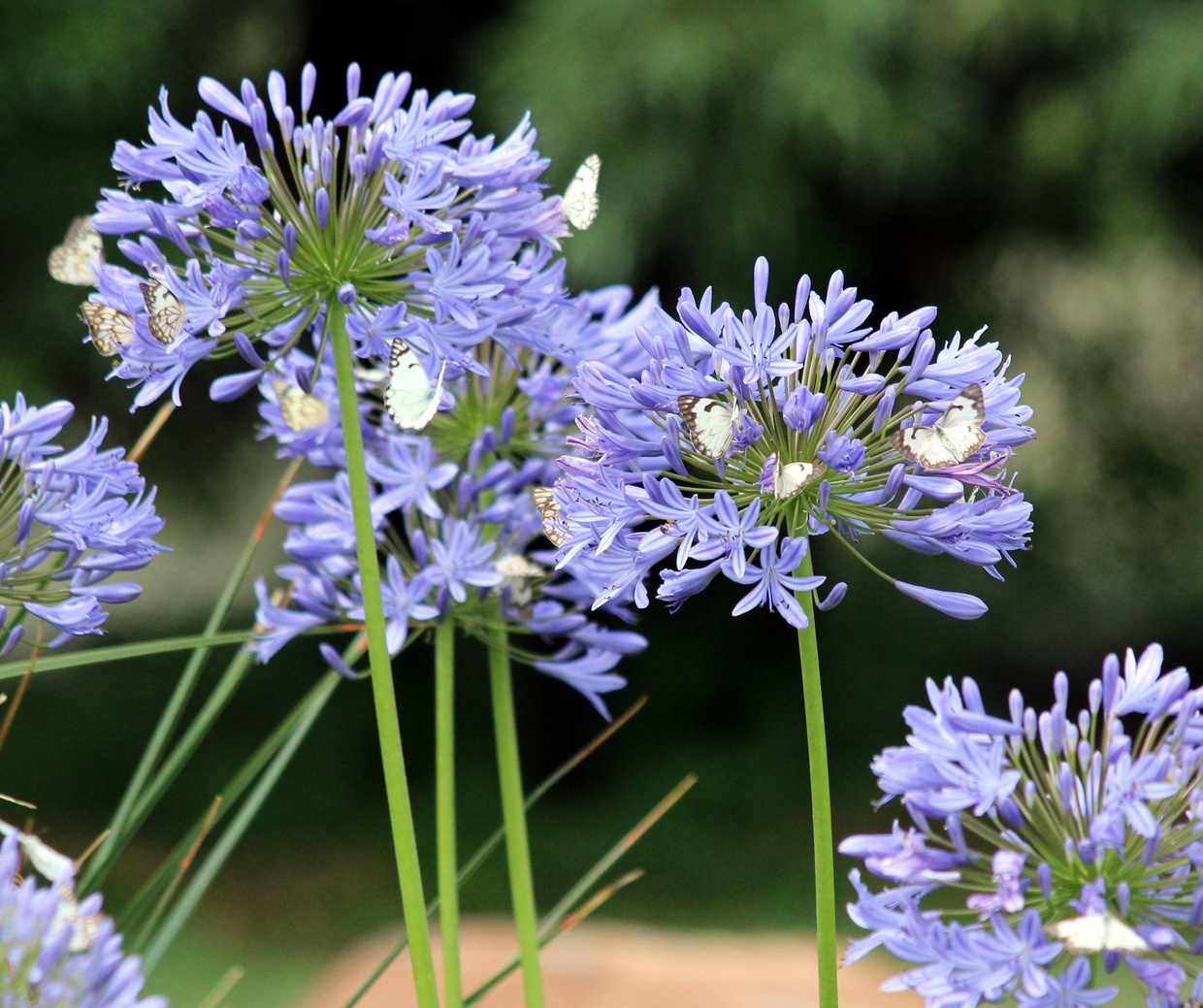 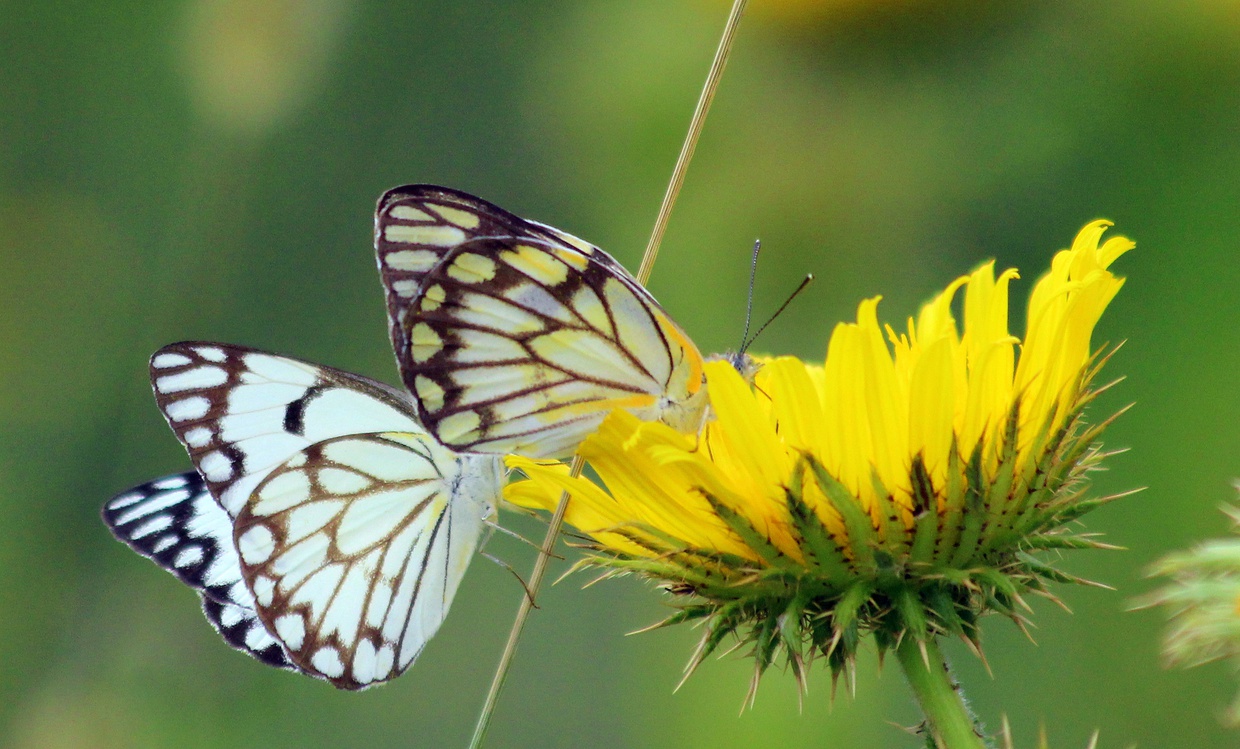 There is no frenzy just a steady flow hour upon hour as millions of  white " Wing-flakes " fill our sky.

Their presence attracted other residents - Meadow Whites -  Blue and Eyed Pansies -  African Monarchs - Common Diadems - Garden and Wandering Donkey - Lemon Travellers - Common Orange Tips - Painted Ladies - & More - they all joined in the fun bobbing and dancing on air together - a  "Butterfly Woodstock "  listening to celestial  music beyond our hearing. 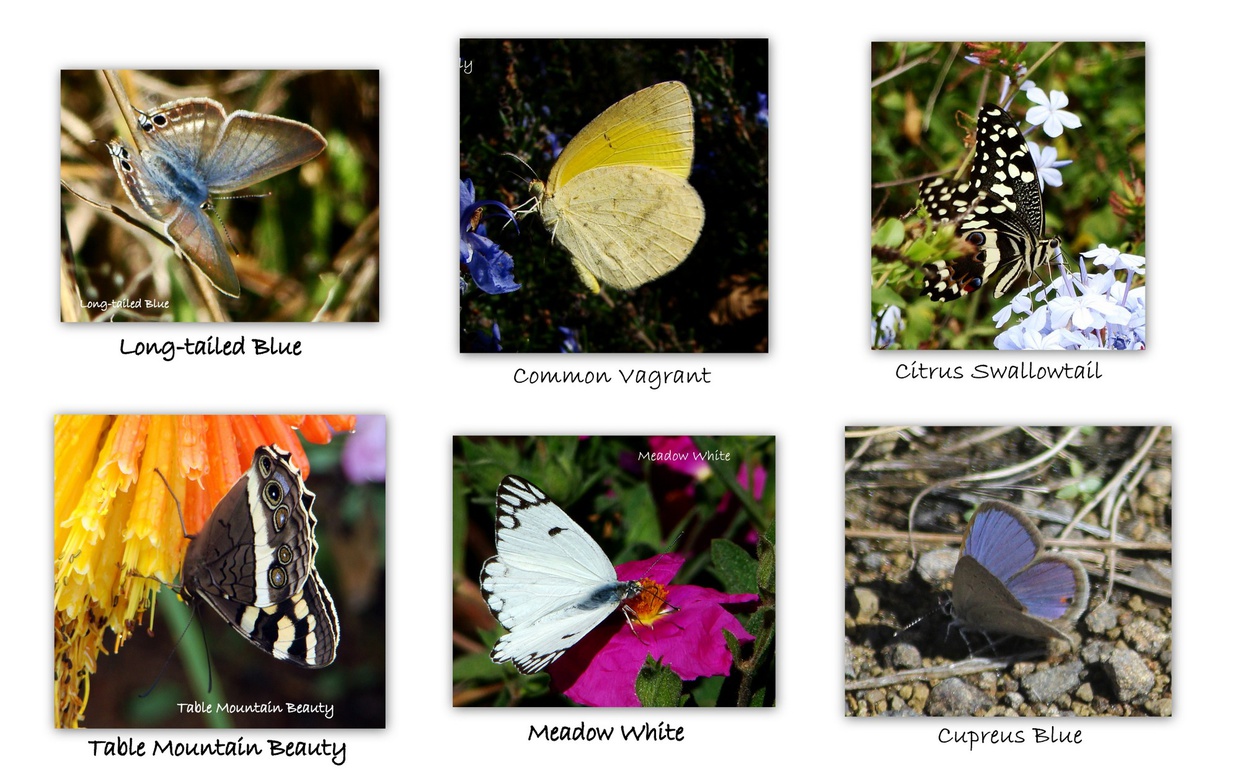 Their numbers increased by now into the millions surely, and the spectacle lasted 6 days here - we heard that in the Karoo it lasted 14 days.

There is no fear attached to them, any other creature in such  numbers would surely cause a panic - our local farmers did hold a breath until they were reassured that this spectacle was no threat. Then they too were amazed. 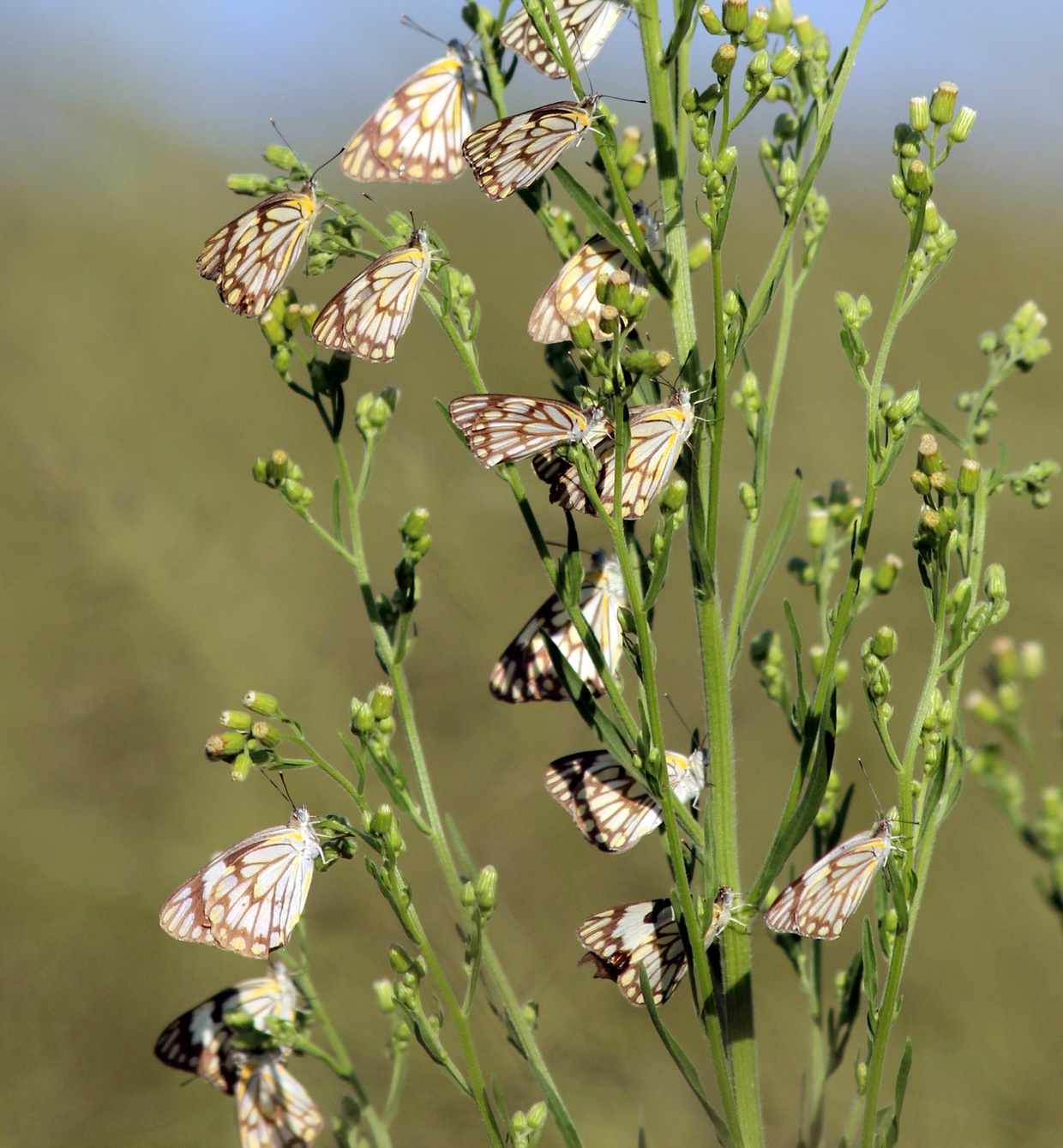 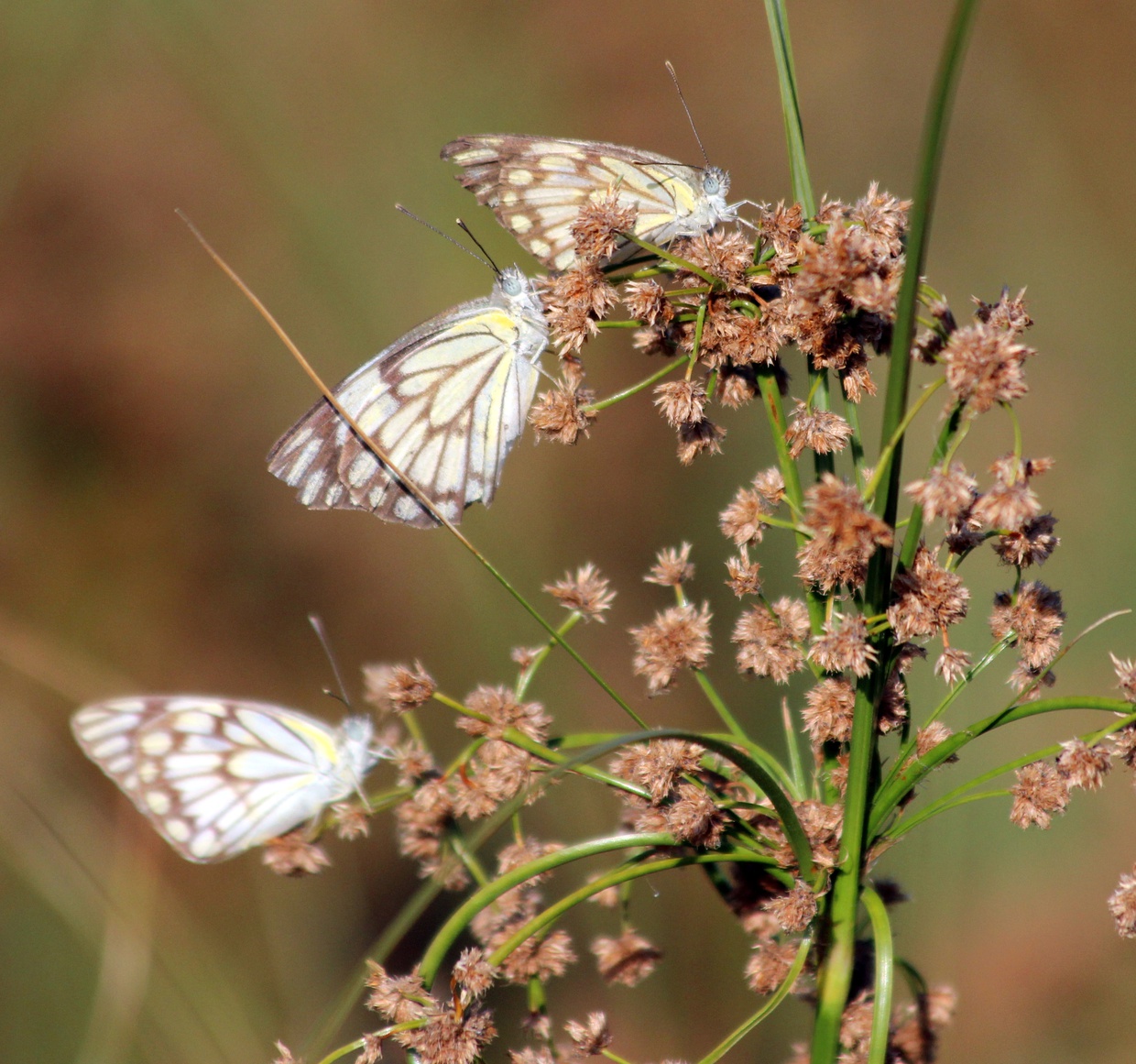 It was with interest we noted that at sundown when they settled for the night, none had rested upon their daytime food plants - such as the brilliant purple verbena.  They chose plants such as flax leaf fleabane especially- where they could blend in and disappear  against the foliage where no predators would find them while they sleep.

Each morning would see a mass lift-off as thousands of " dew covered jewels "  flew to feed on the wild flowers again. They completely ignored our neighbours sunflowers and mealies, perhaps too much GM.

There was a constant ebb and flow as daily large numbers left to fly East and North to be replaced by more fresh arrivals. Then as suddenly as it began it was over. What a spectacle - this was, apparently, the best butterfly migration since 1966.

If more people would only learn to love and study our South African butterflies, their bright colours and different lifestyles,  and enjoy their real beauty,  then they would become tolerant of our other rich insect heritage. Then there will be hope for this fragile planet, without either we will not survive. The role that these delightful creatures play is critical to our wellbeing. We need to tread gently upon " Our Earth "

MIGRATIONS OF A DIFFERENT KIND.

Each year we greet the arrival of other regular visitors, some going North to avoid our winter whilst others journey South to miss the cold northern climes.

Some undertake amazing journeys, which often means many months of each year are actually spent in the air flying from one destination to another, along the way they face enormous challenges, harsh weather conditions, will there be food en route, the dangers of powerlines and predators and finally, perhaps the worst of all HUMANS. There are regions around the Mediterranean where literally millions of migrating birds are shot for fun  by " Sport Hunters" who take a terrible toll of these beautiful creatures, many are weary from a long journey and are easy targets.  This is not to mention the dramatic effects of global warming and decreasing wild spaces due to increased urbanisation,  they have to cope with a constantly changing scenario .

.Amur Falcons travel to us from the Amur valley in China, Steppe Buzzards from Russia, White Storks from northern Europe but perhaps the most impressive for us are the Barn Swallows who apparently fly to Russia, UK and Denmark. Those small wings carry them some 11000 kms each way. What an impressive effort by a bird that weighs in around 20gms  and a wingspan of some 180 mm

Each year they gather here at Amohela ho Spitskop in their hundreds to rest and feed before flying on. 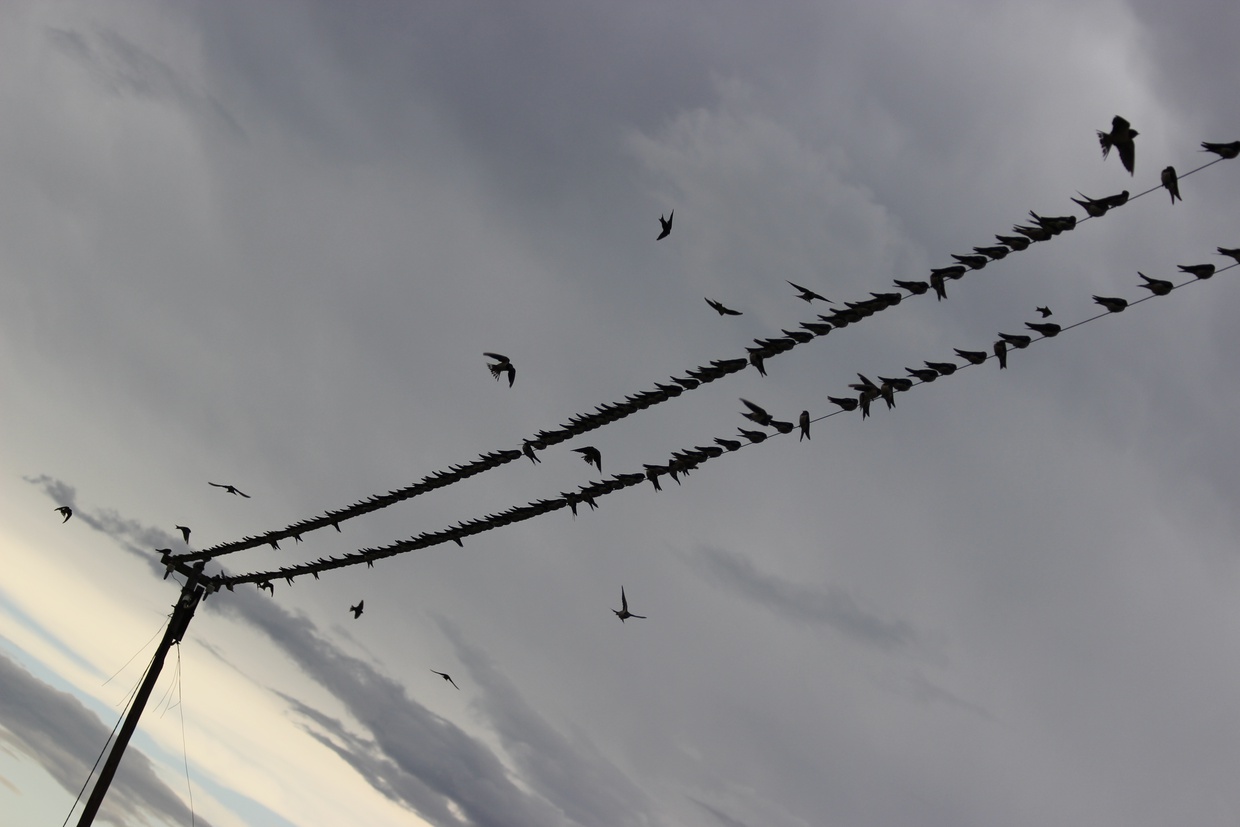 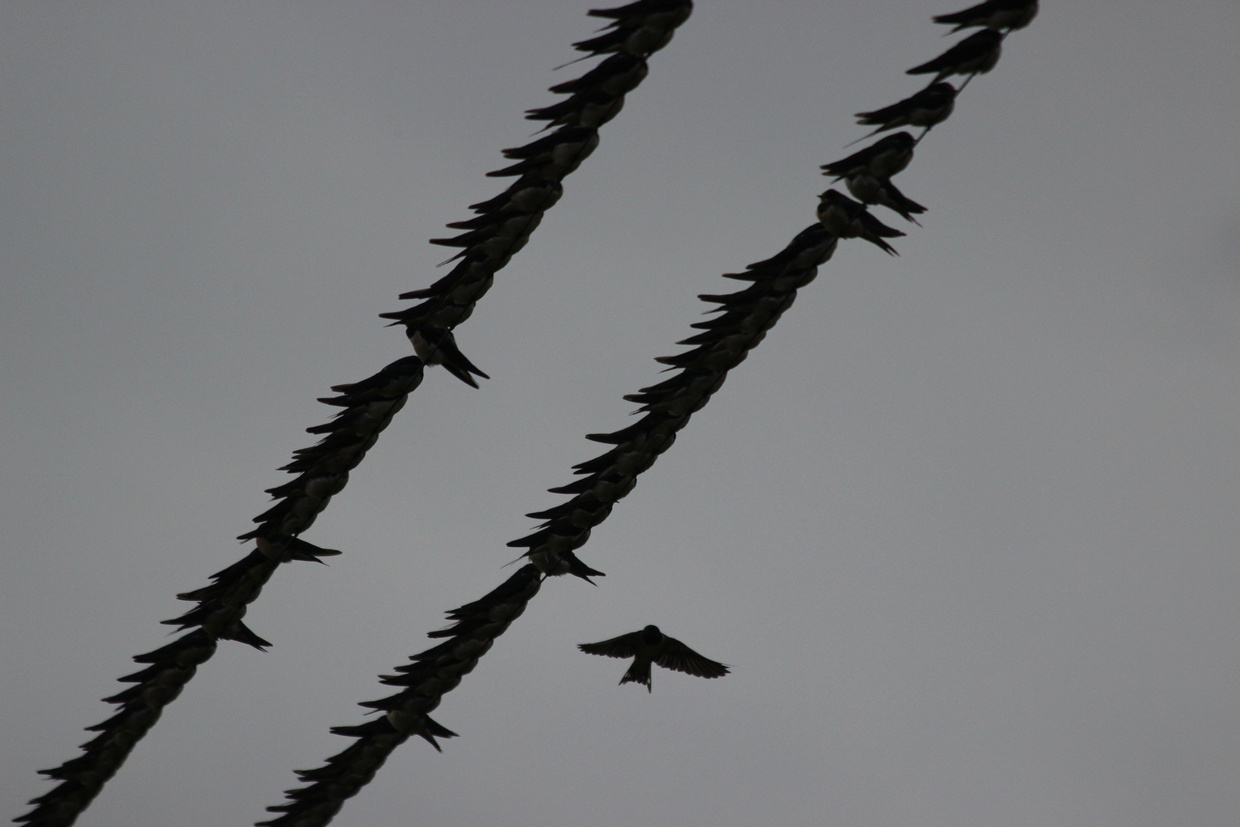 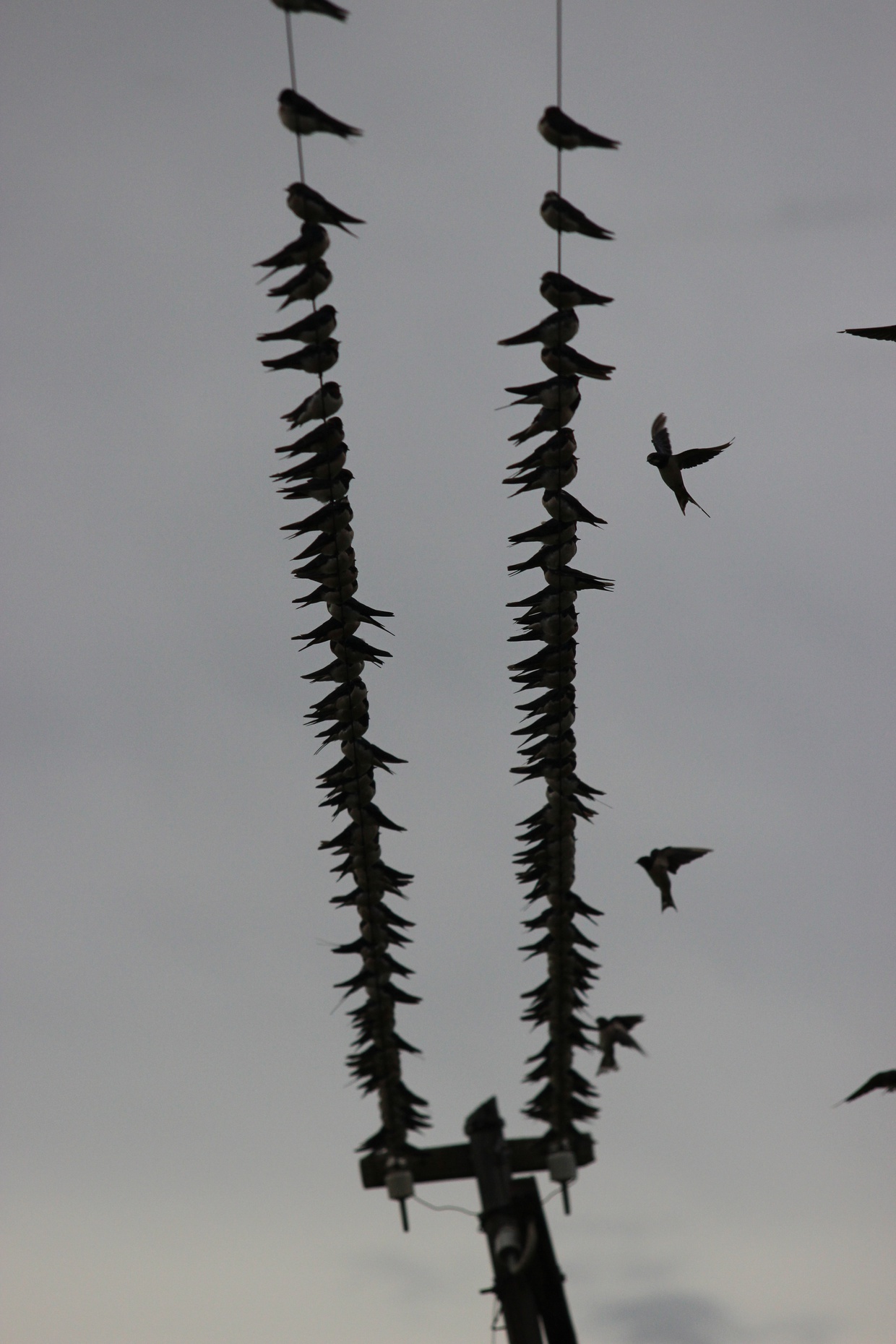 Despite their diminutive size and they more than make up for it in effort, these cheerful little birds are a delight wherever they go - when the swallows arrive Summer is on its way. 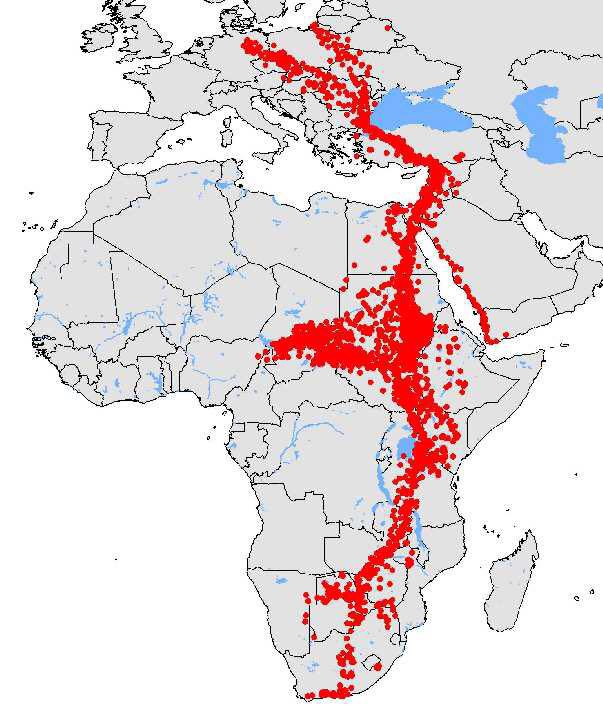 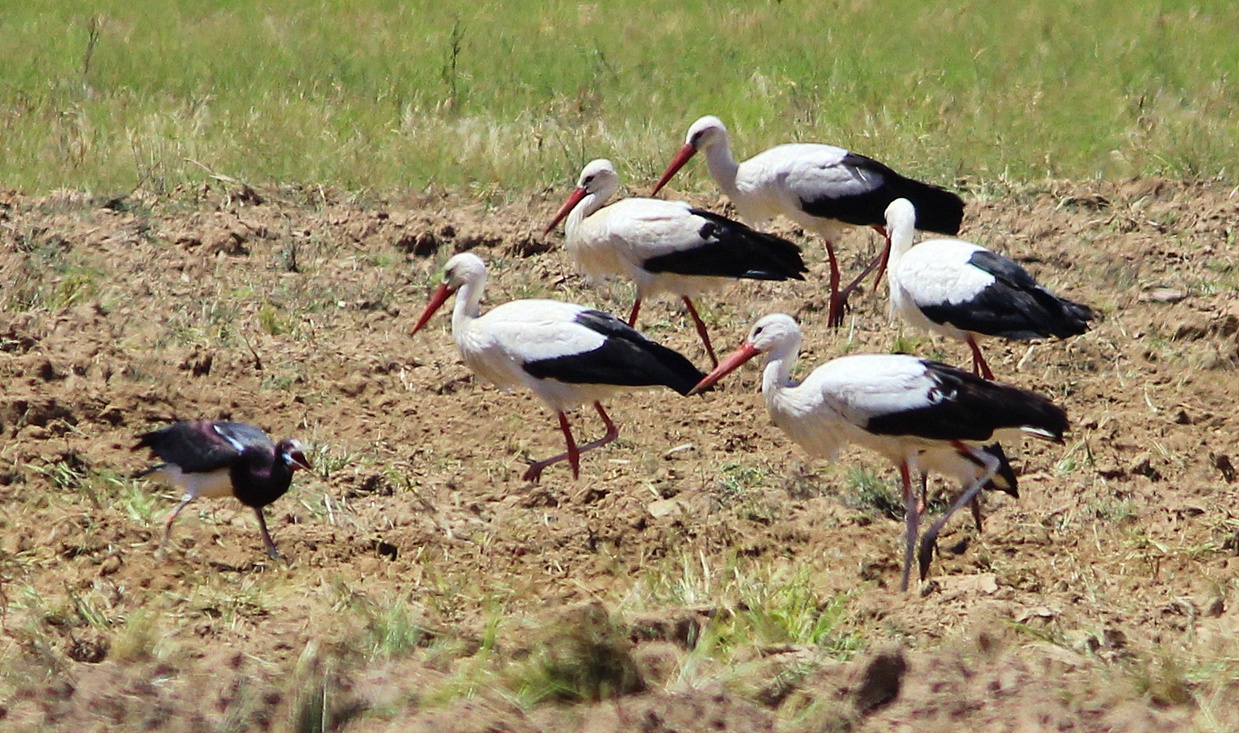 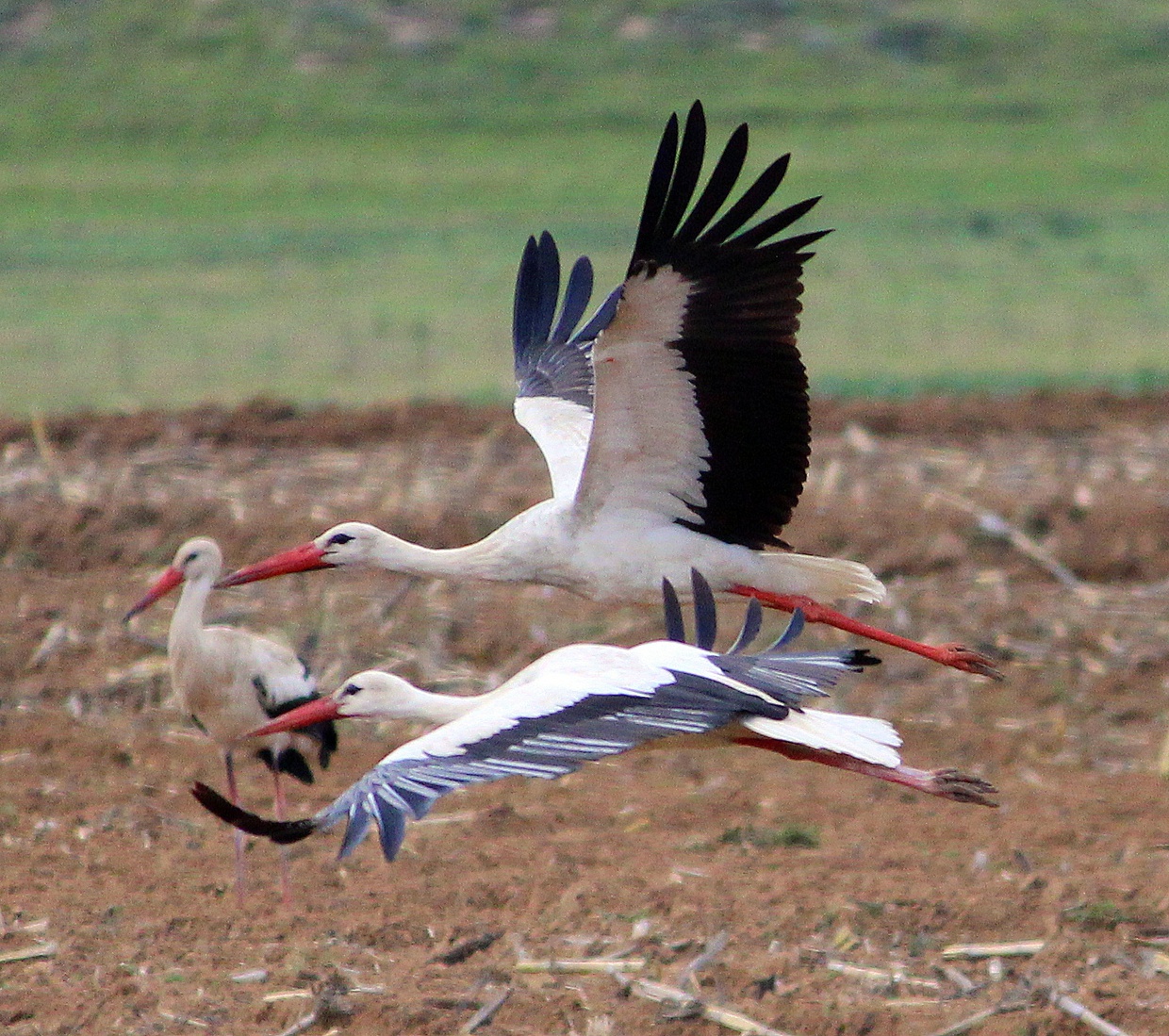 Along the way they are joined by Abdims Storks - from Ethiopia, Senegal and West Africa. 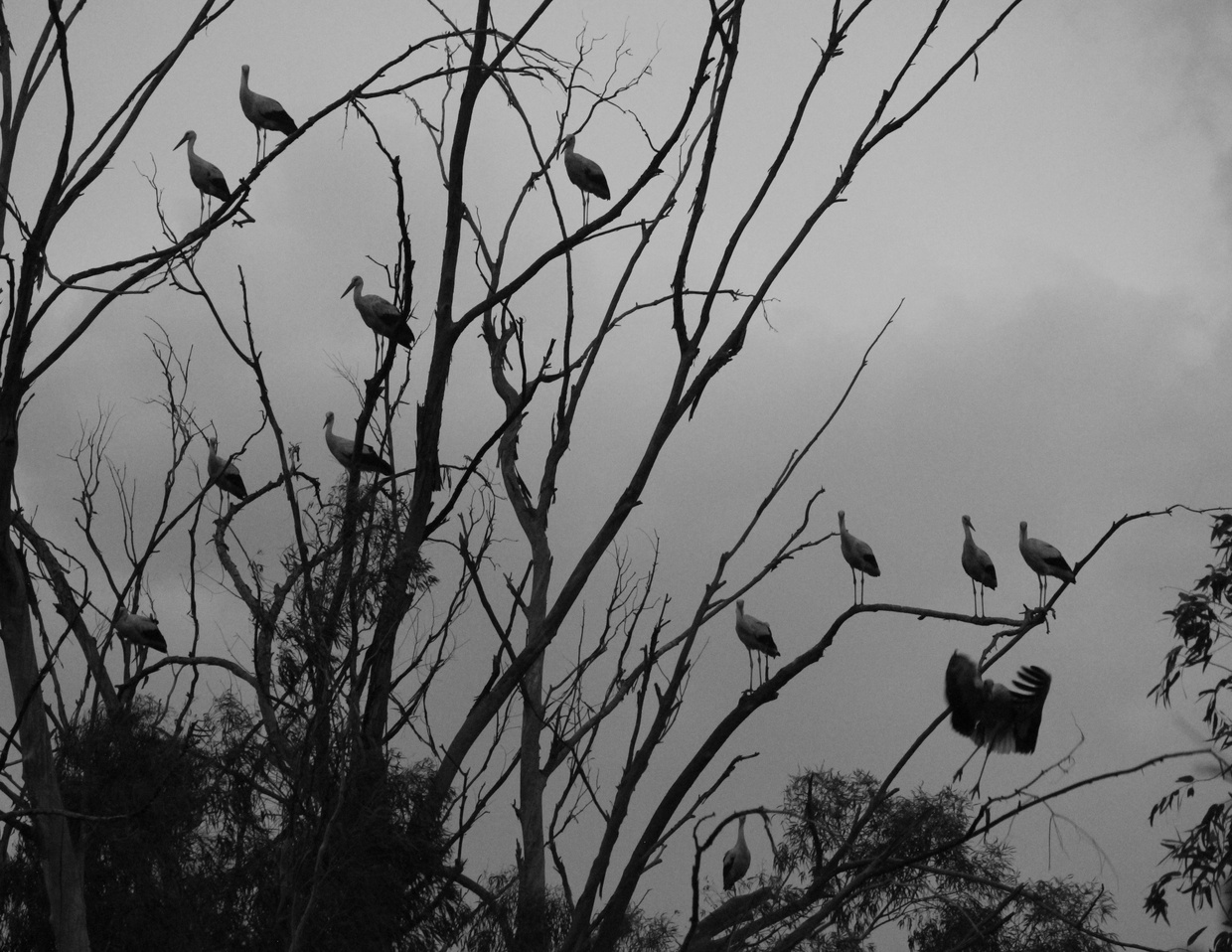 It's sundown and here at Amohela ho Spitskop the storks roost in our dead trees. In a good year we often have  150 or more  balancing on such slender branches, usually on just one leg too. 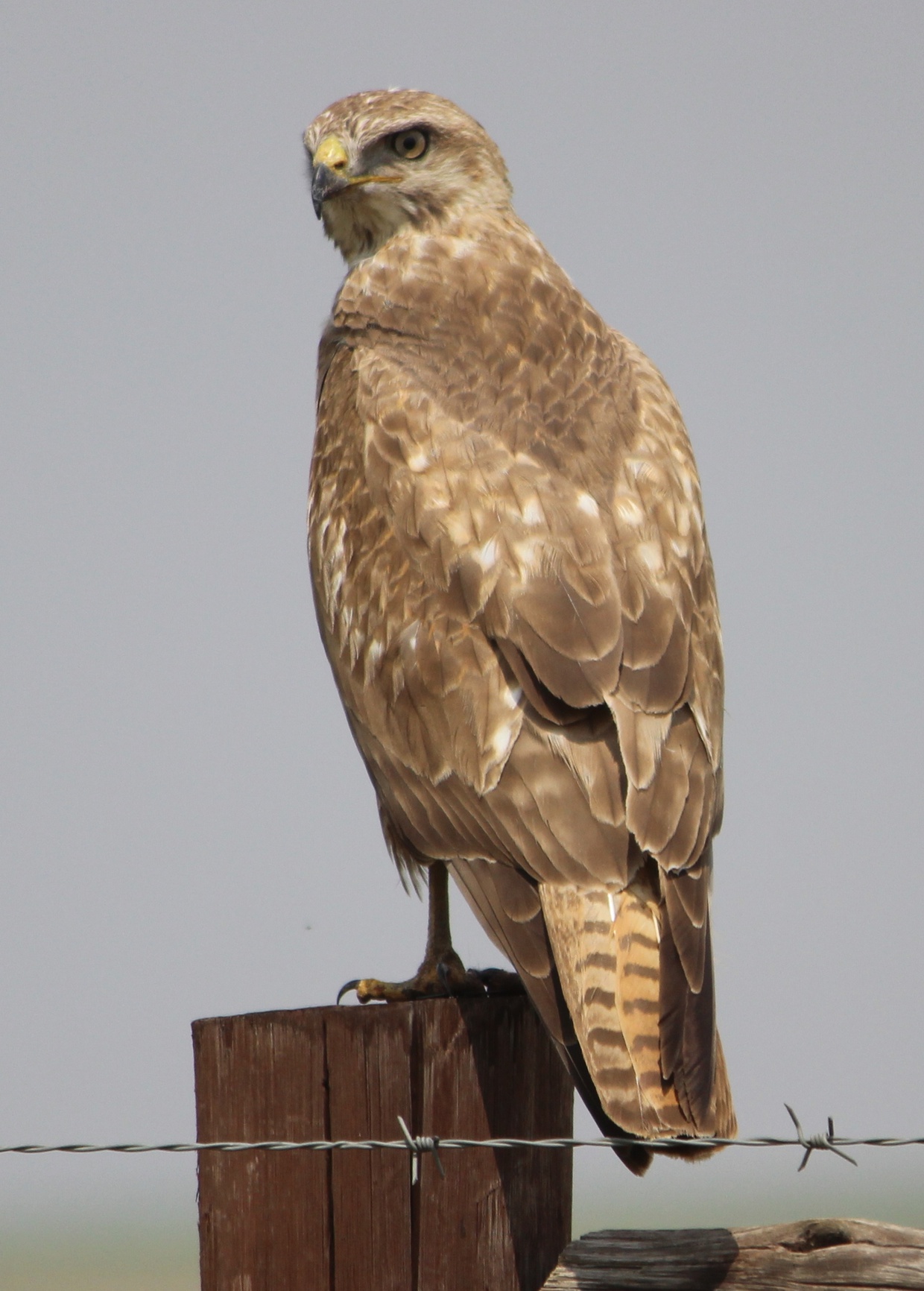 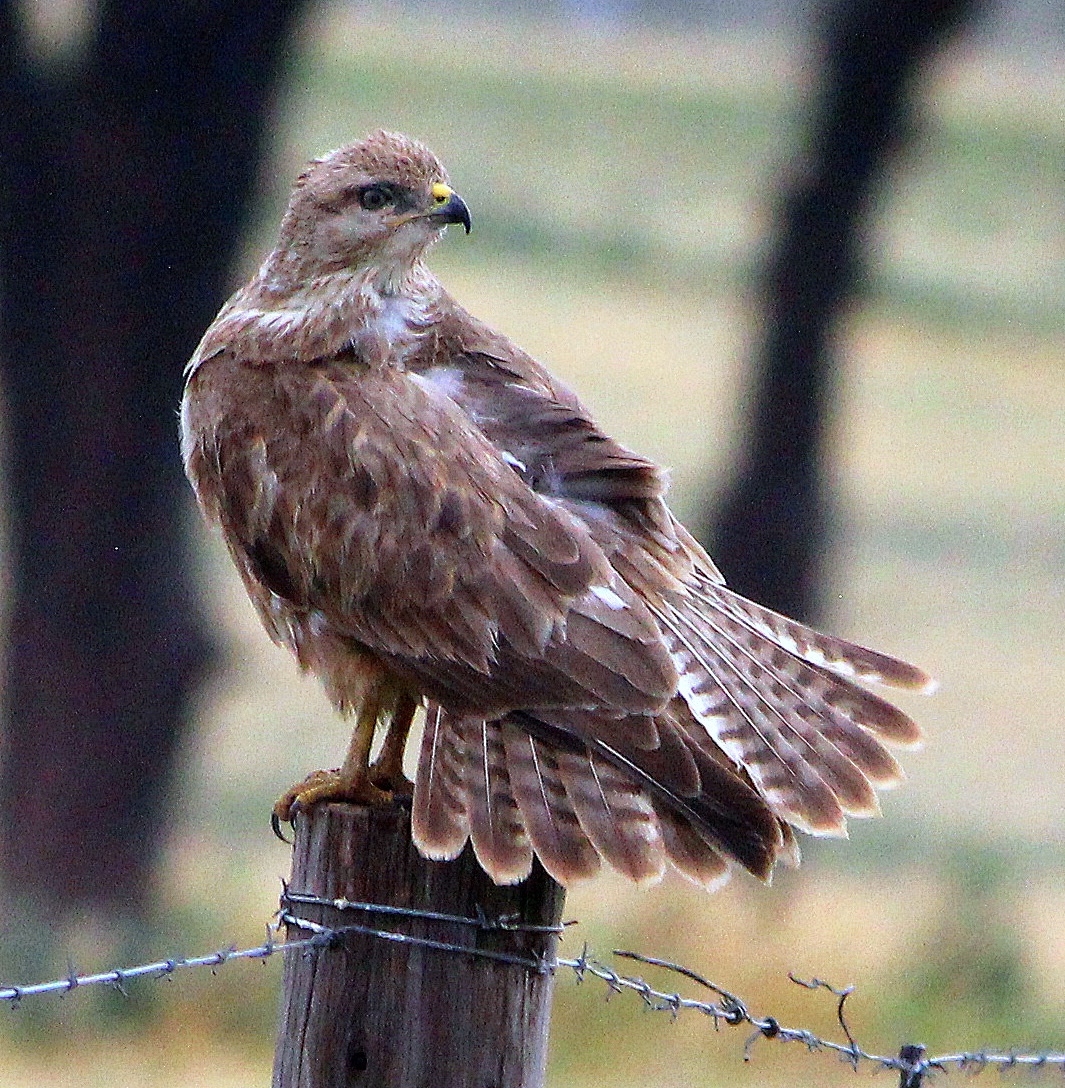 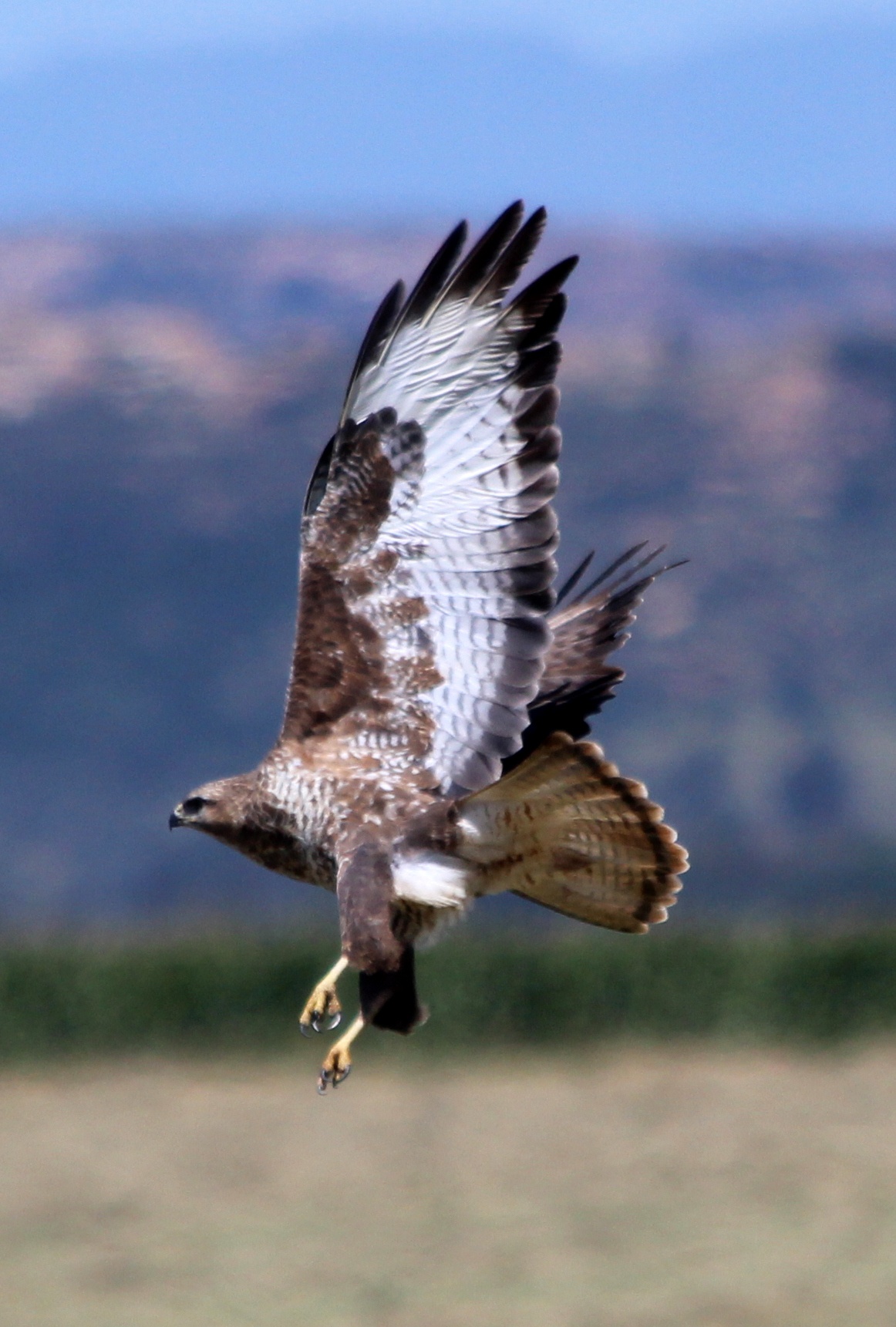 Perhaps the largest raptor to embark on a long migration journey to Southern Africa is the Steppe Buzzard  (Common Buzzard) a very regular visitor to Amohela ho Spitskop Conservancy,  they travel some 13000 kms each way from north eastern Europe, Finland and Russia.  This handsome raptor avoids the sea crossings preferring the security of land and migrates via the middle east. Sadly they too are a target for " hunters " they remain with us for some while before returning to their breeding grounds  when the northern winter is over. 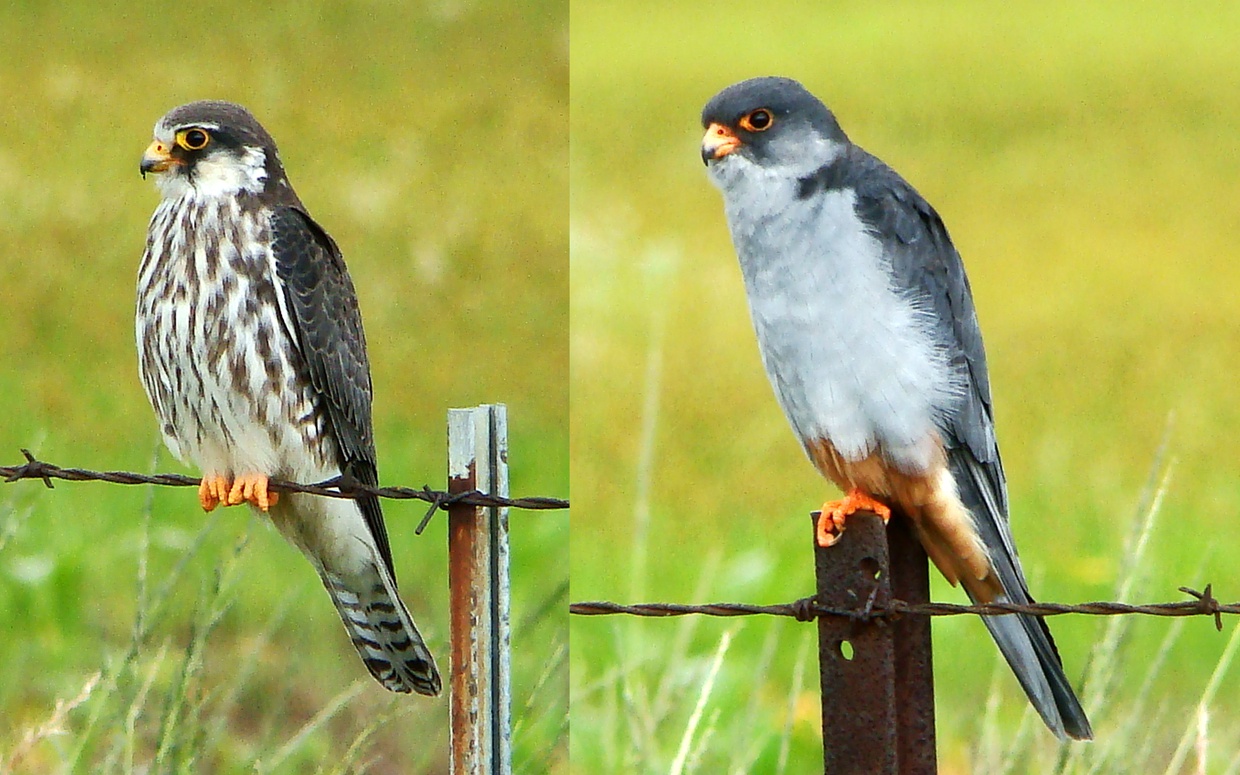 Amur Falcons probably undertake the longest migration of all our visitors some 14600 kms, coming to us from the Amur Valley in north east China, flying via Burma and Asia through India .They then cross to the Arabian peninsular after making the longest sea crossing of any raptor, between 2500 - 3000 kms, and down the length of Africa to South Africa - an epic journey indeed. Just imagine that,  nowhere to rest, no feeding just flying non-stop over the sea, even through the dark of night for 2 or 3 days, what an amazing feat of endurance .

Amazingly they time their migration so they can utilise the monsoon winds as tail winds which enable them to travel  huge distances in a short time - a return journey of some 29000 kms in about 2 months - a truly remarkable achievement., almost defying belief.. What incredible little birds with a wing span of some 220 mm and weighing in around 130-150 grammes.

We at Amohela ho Spitskop Conservancy used to see them in large numbers but their numbers have diminished in recent years due to "hunting" in India. Global warming is changing much of the habitat along their way, they feed mainly on insects which they catch and eat whilst on the wing so for them life is getting harder.

It is wonderful to see all these avian travellers each and every year they undertake the huge journeys to spend some time with us during our Summer months before they return to their breeding grounds far away.

We also have many intra African migrants, those regulars who go to the warmer parts of Africa during Winter and then return to share our Summer, we welcome them all too.

Thanks to satellite tracking we can now see just how far some of these birds travel - they are frankly amazing.