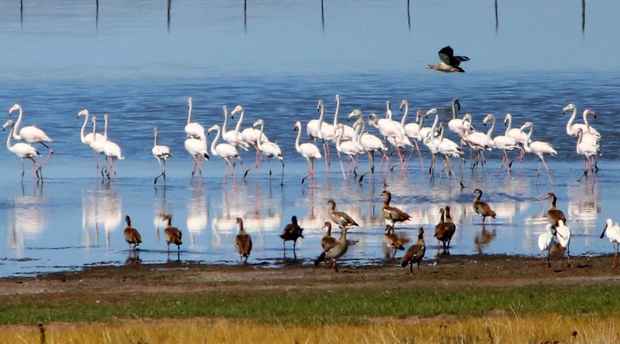 They came for A Year and a Day, these giant birds dressed in royal attire, they follow no clock that we know nor can we predict their arrival but we can and do delight in their presence. 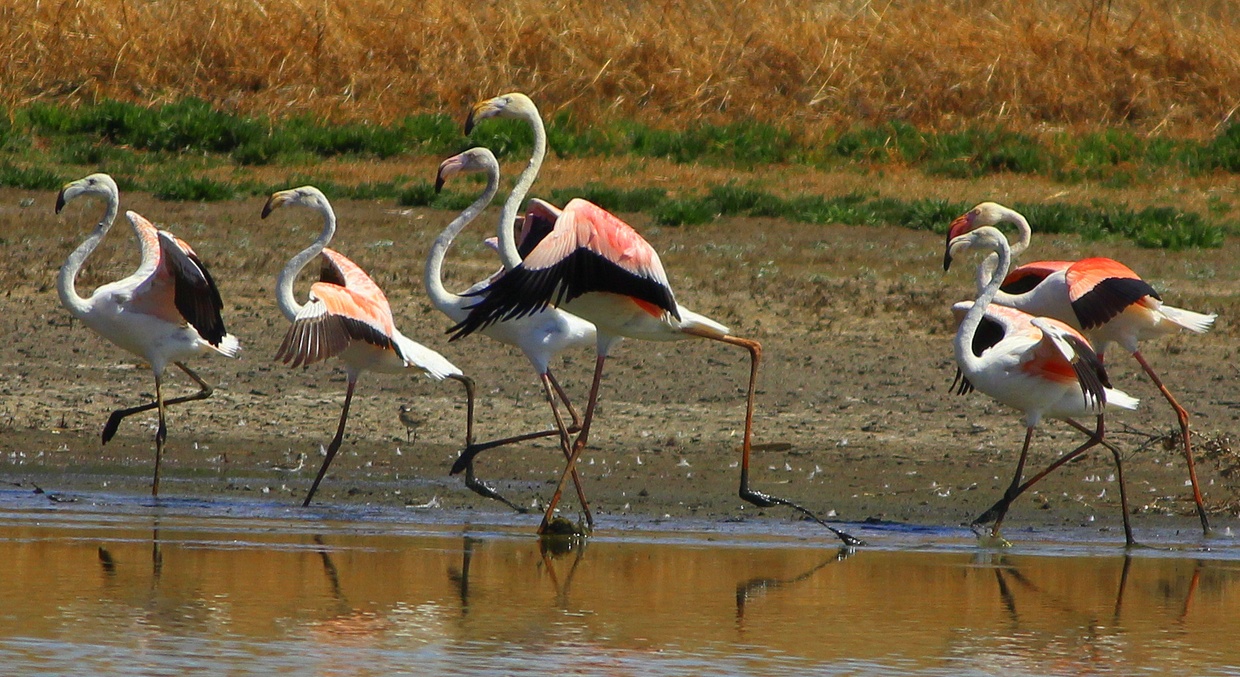 It’s October 6th 2017 and on a small pan next to the S343 just a few kilometres from Amohela ho Spitskop Country Retreat a small flock of 8 Greater Flamingos has arrived and are busy feeding.

My mind goes back some 5 years to late October 2012 when another small flock of Greater Flamingos arrived at this same pan only this time it was a FIRST,  Flamingos had NEVER been seen here before EVER. We are after all some 1700 metres above sea level on the Lesotho border, cold & mountainous but sure enough these very special birds had come here –where from? and why? 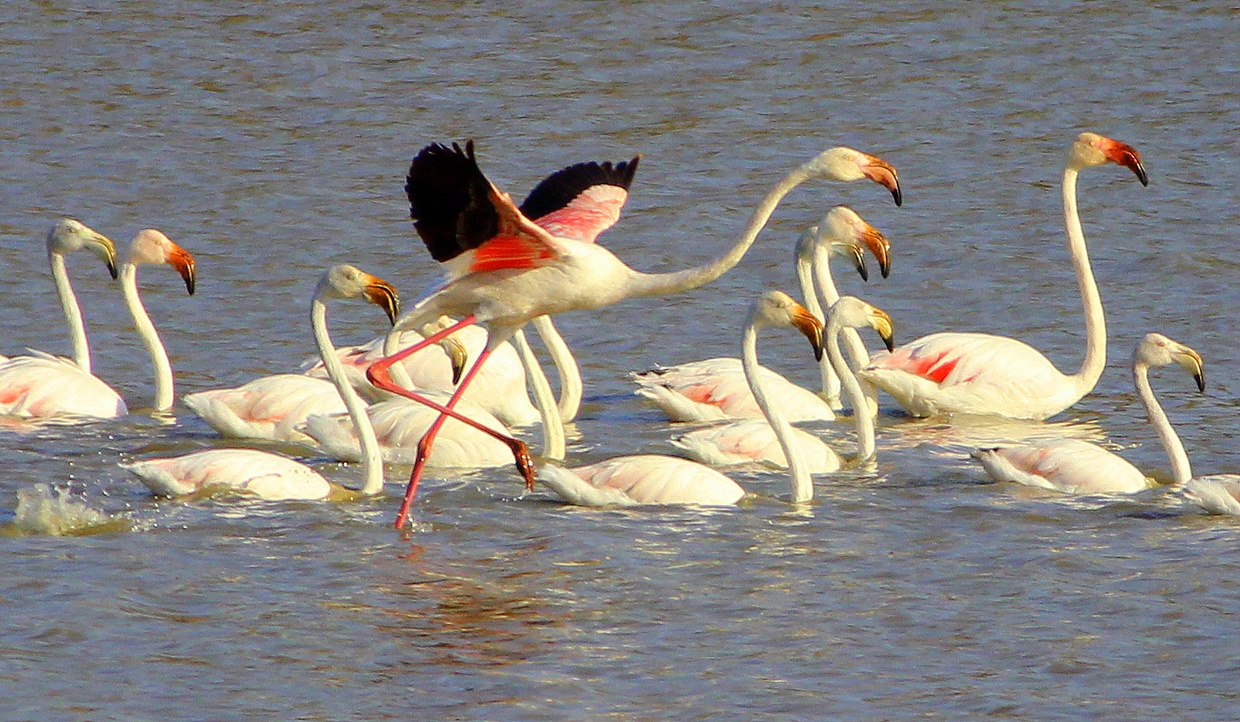 My records show that in June/July 2013 there was a continuous ebb and flow of numbers with new birds arriving almost daily and others leaving, the new birds were brightly coloured but after a short while they lost their trademark pink & scarlet due to their diet being deficient in canthaxanthin it seems our Free State mud is lacking the algae containing sufficient carotenoids.

In our immediate area there are 3 large dams which proved suitable and the birds migrated between them for a year and a day. Numbers fluctuated daily but peaked at over 120 and there was always a core group remaining. It was magical! During this time I was able to study them closely and became accepted so that eventually they ignored my presence. I watched them Wing Salute, stretch to full height and Neck Wrestle, and they seemed to love holding a "Committee Discussion" hugely gregarious they have an organised social structure, their many disputes appear to be settled in the company of a referee, they always have a look-out on duty when they are feeding. 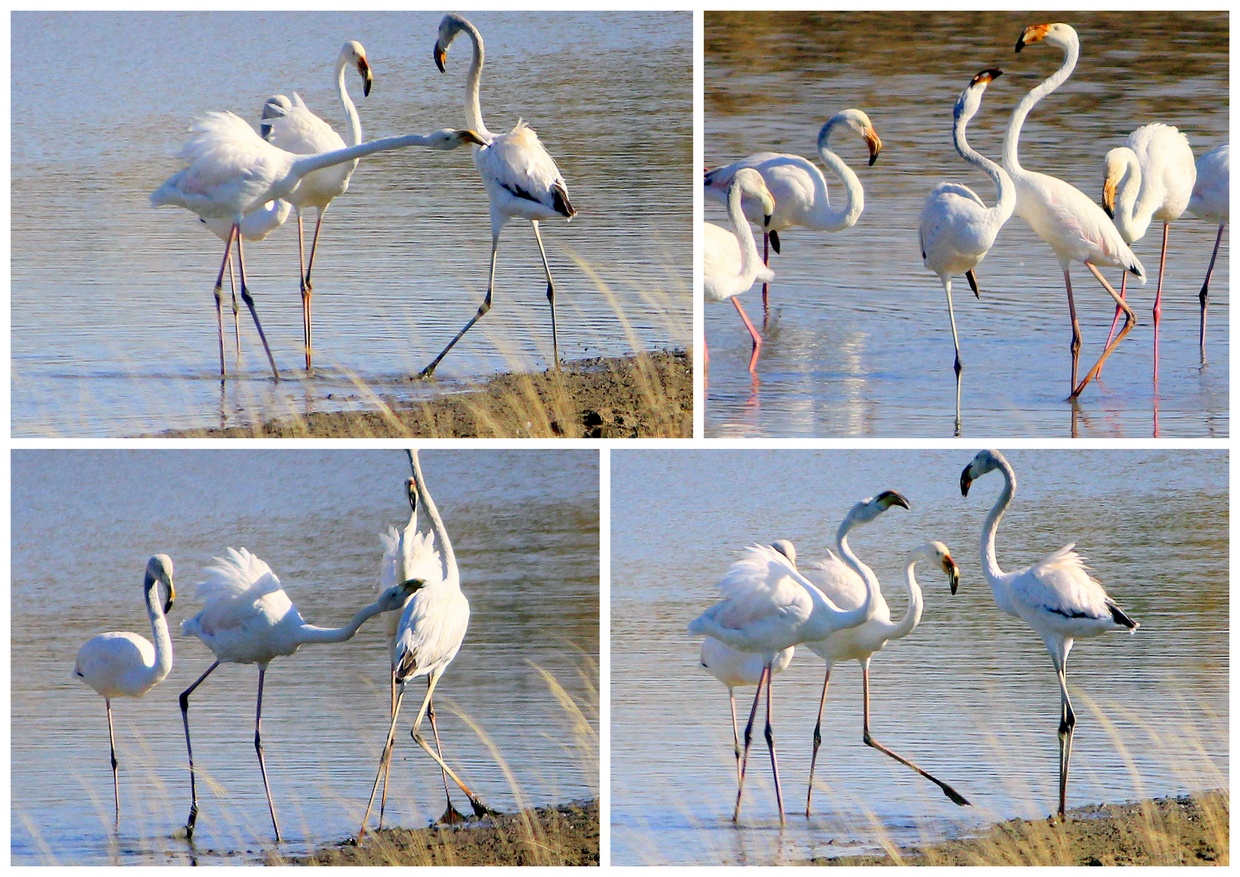 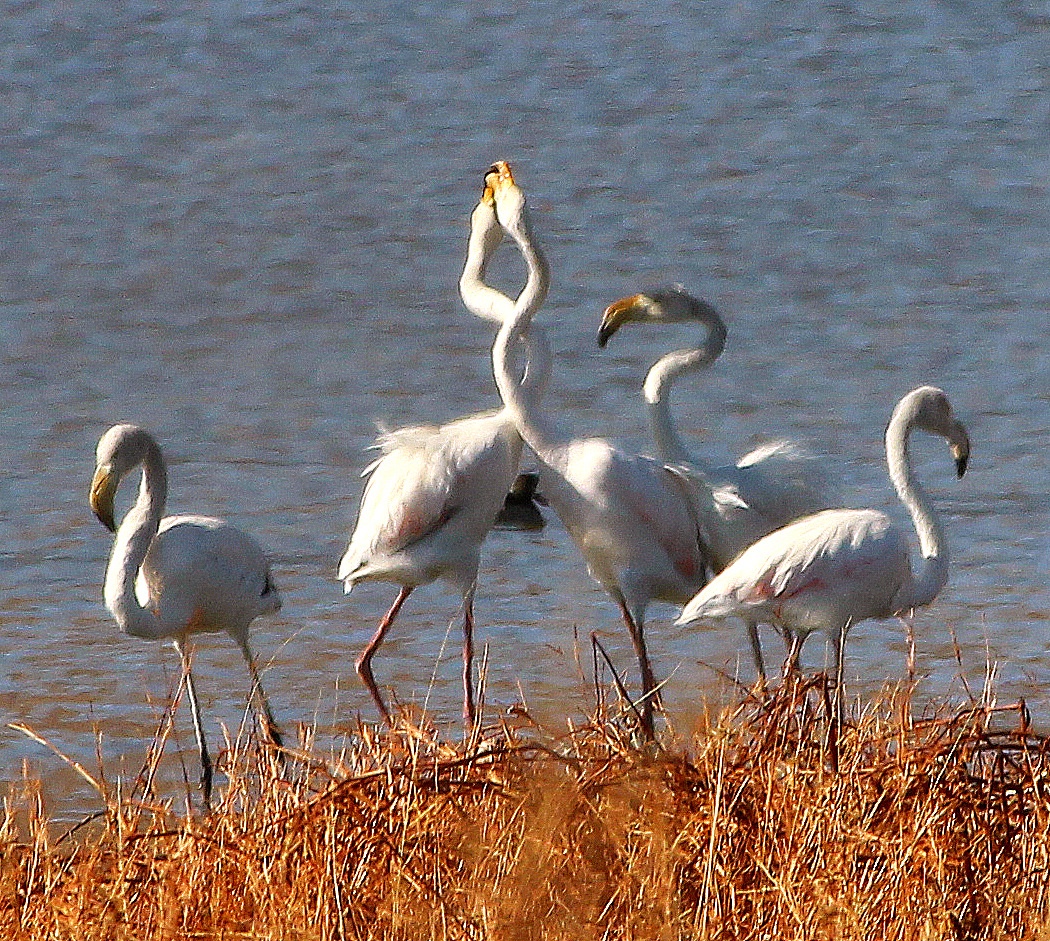 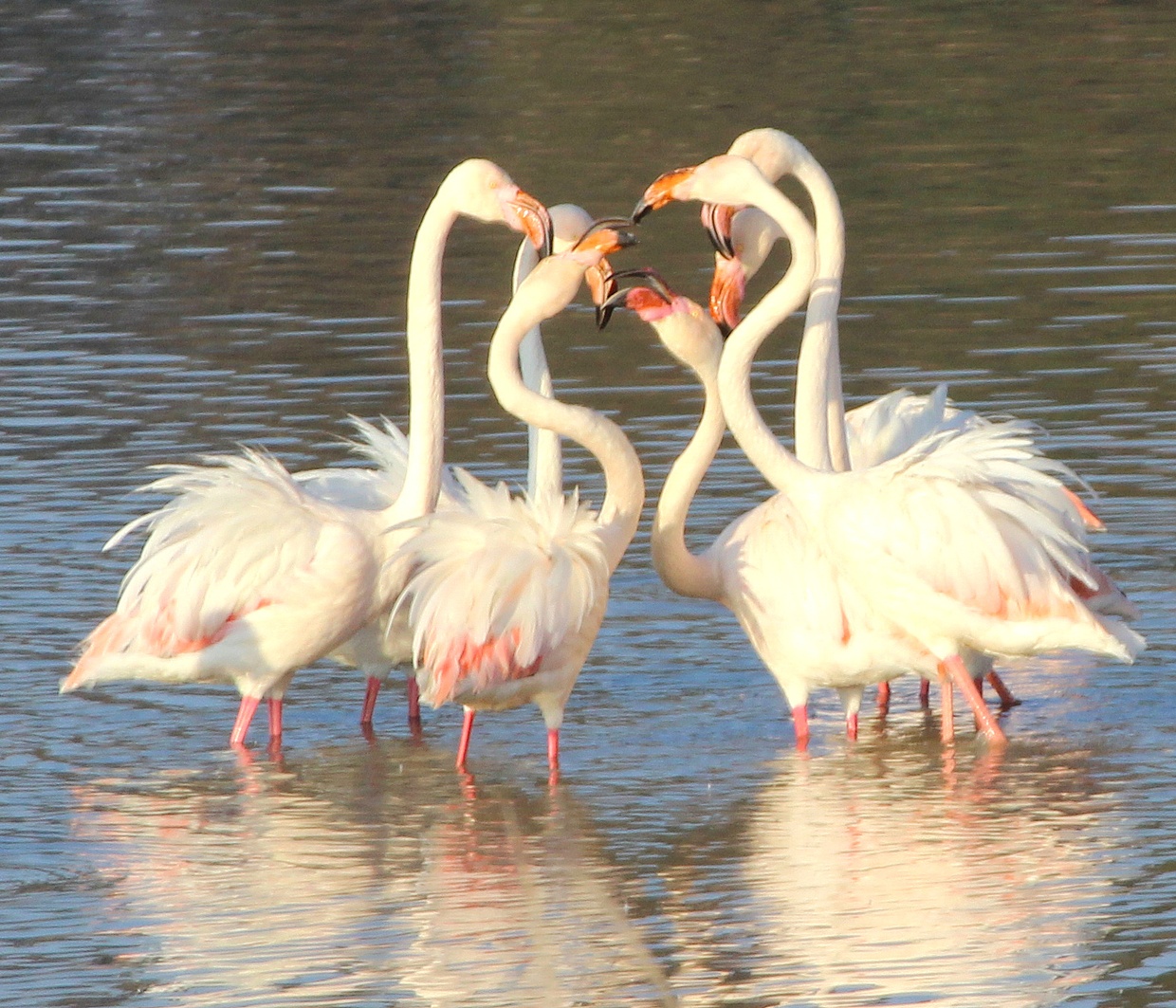 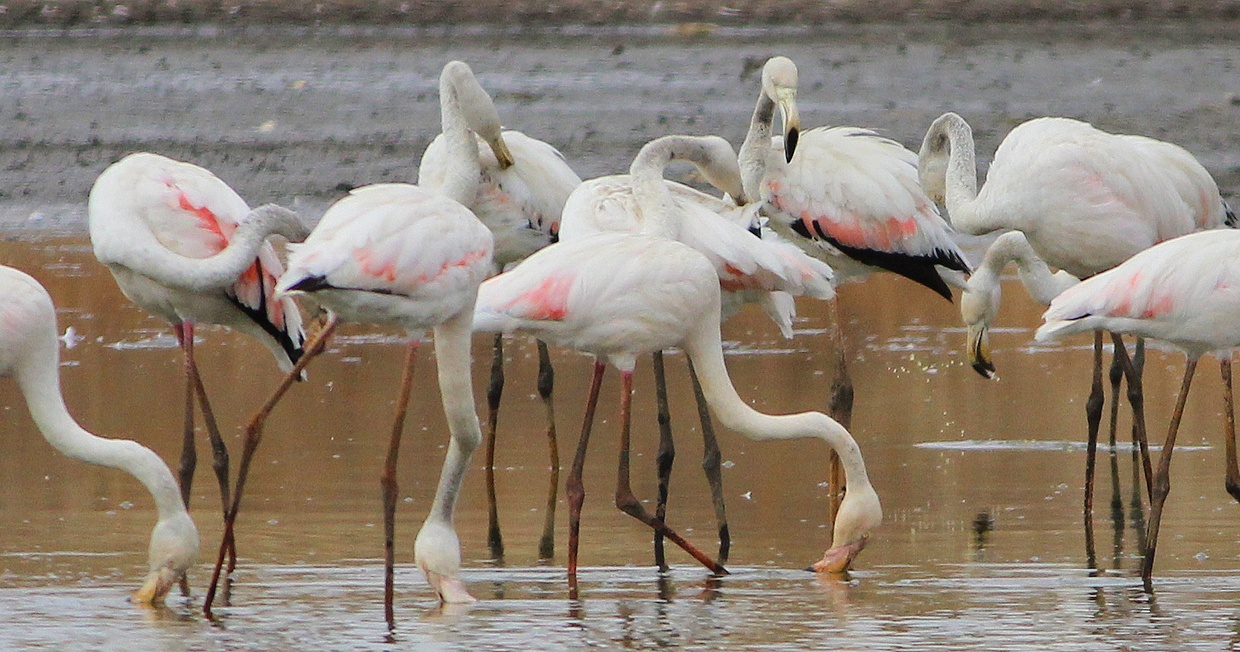 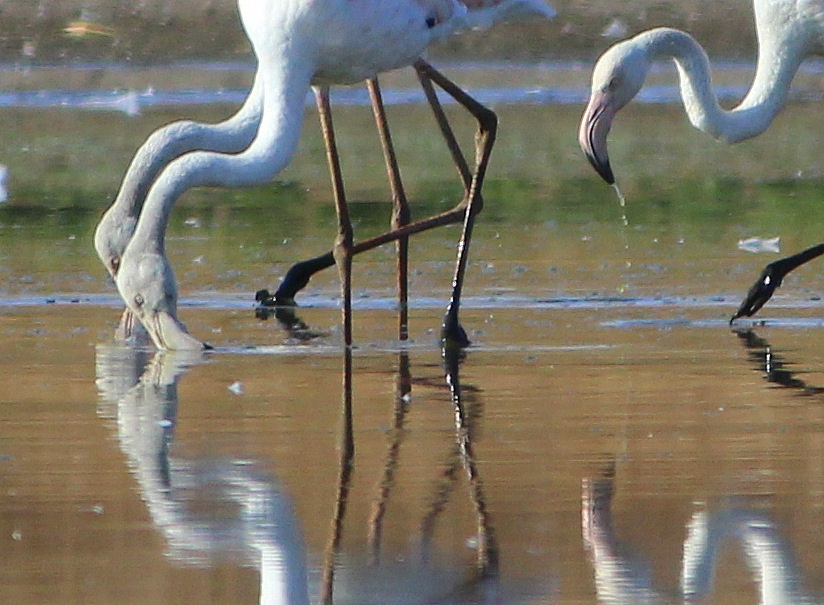 AND OF COURSE " THE GRAND PROMENADE "

Then one night, in the way that Flamingos do, they suddenly departed-- next morning all were gone.

They fly great distances but always at night, guided by some ancient planetary GPS system beyond our knowing, they communicate mystically, and synchronised to the second, they run, hop, skip & then lift off the water into the air where in close-formation of legs wings & long necks they transform into a gorgeous cloud. 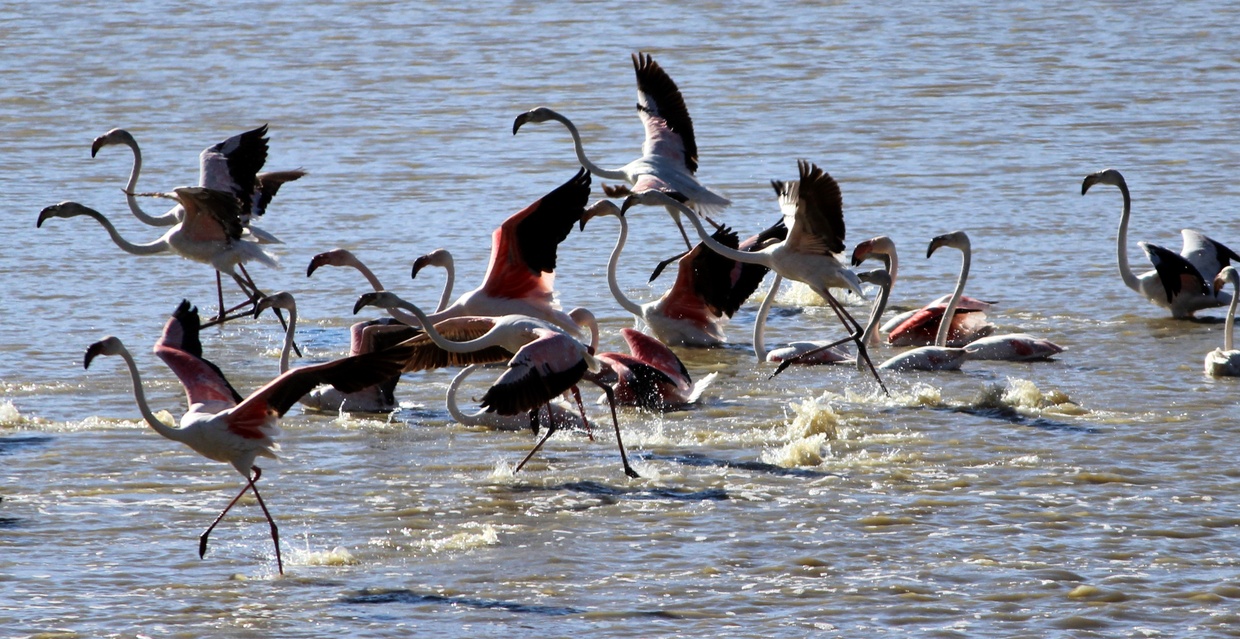 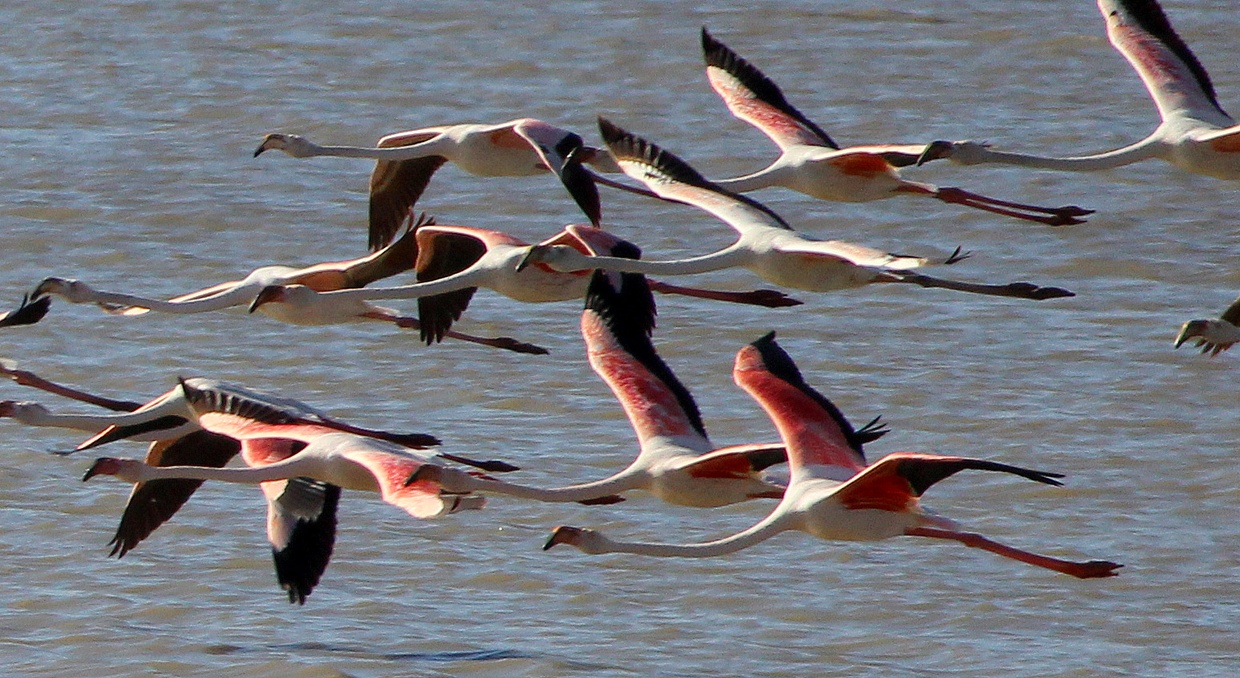 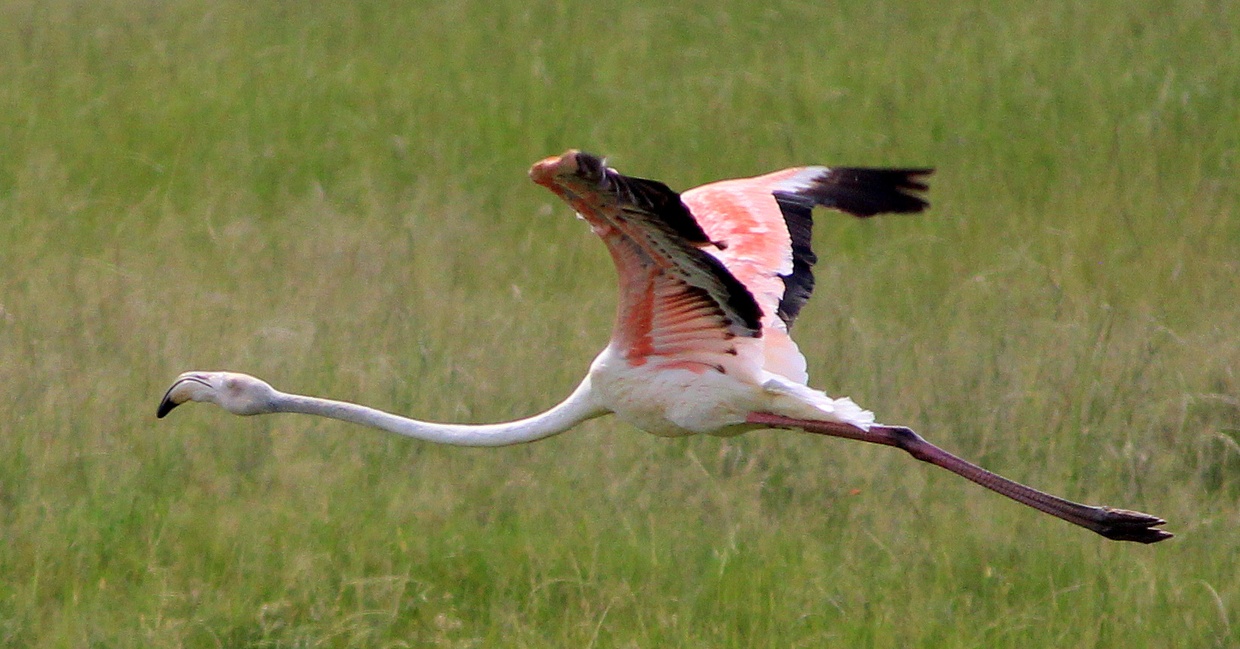 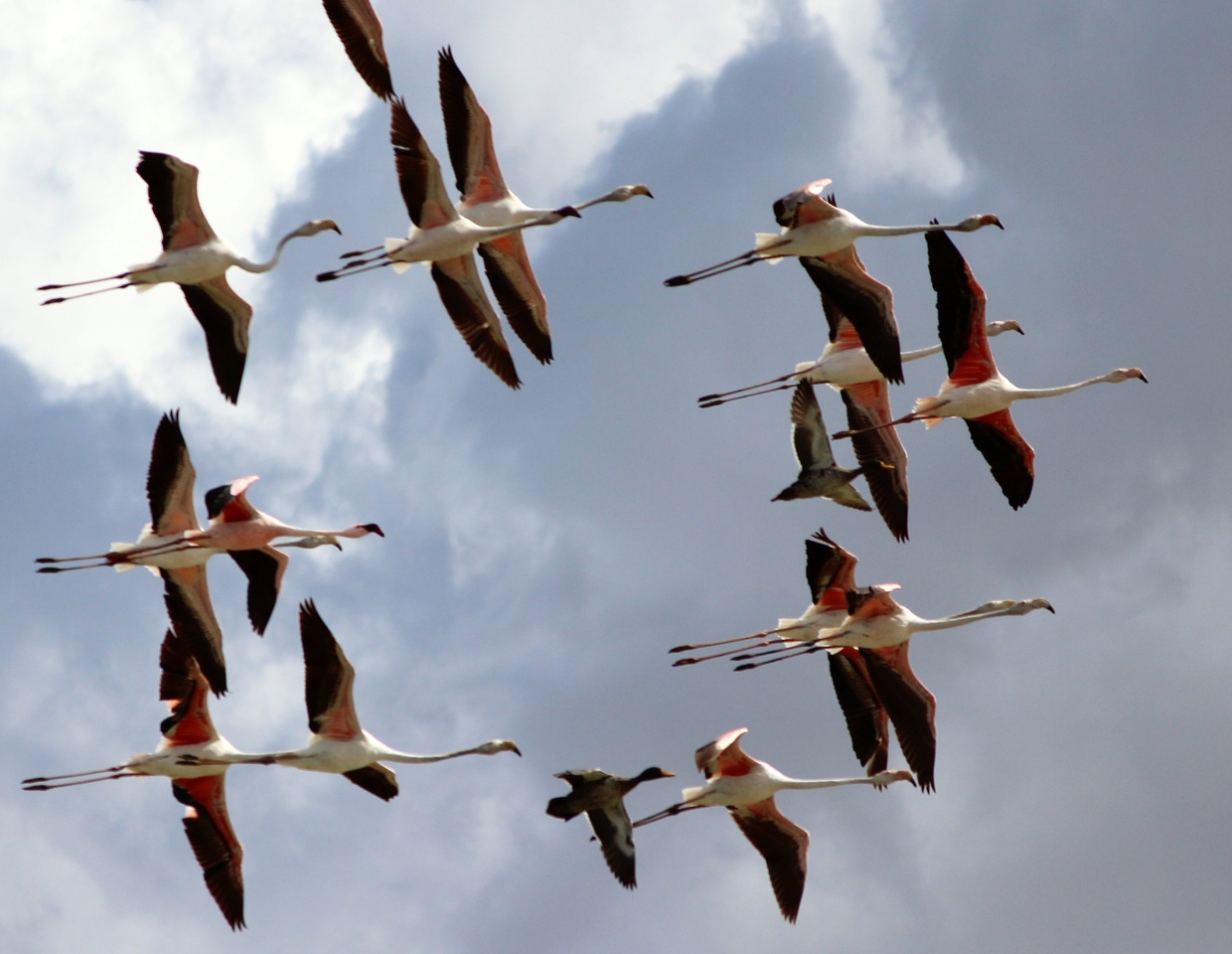 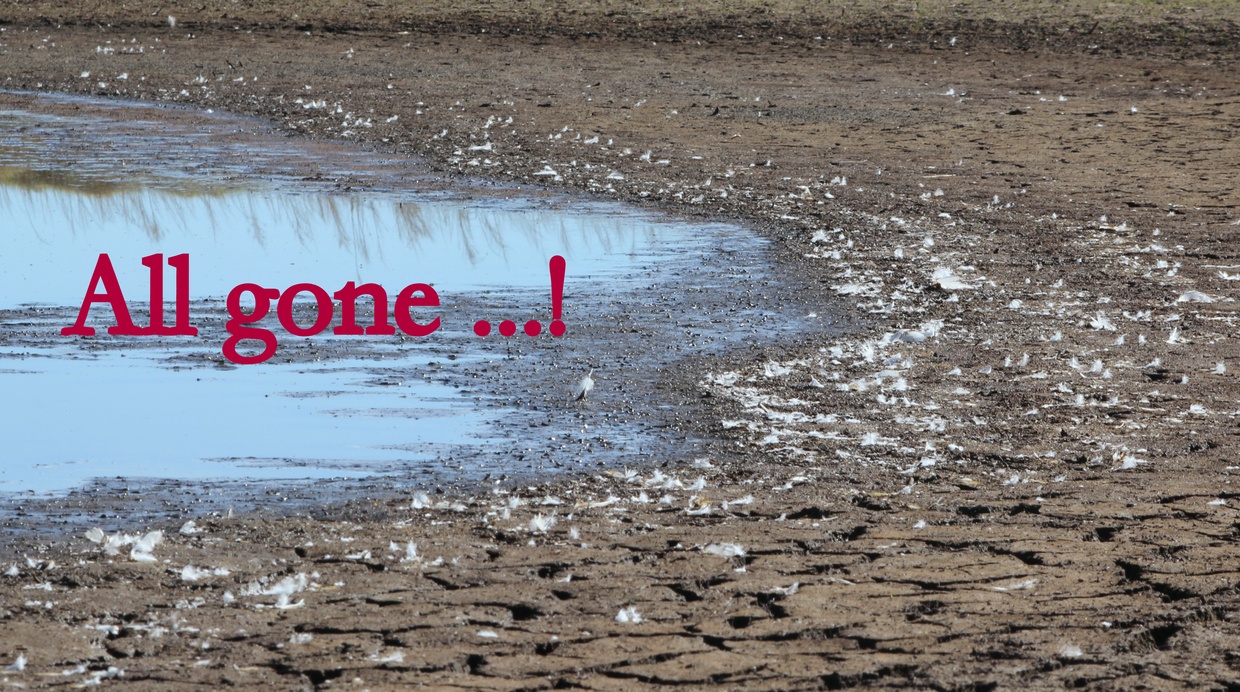 We next saw them several times in December 2016 – but they were only passing through.

The fabulous “fire-bird” Greater Flamingo stands tall at 1.8 metres, can handle the most hostile of environments and yet still retain a grace that is all their own. Unique, truly magnificent ancient creatures for they are descendants of the dinosaurs, undoubtedly regal, splendidly colourful, gregarious and noisy but worst of all -----they simply disappear without notice! 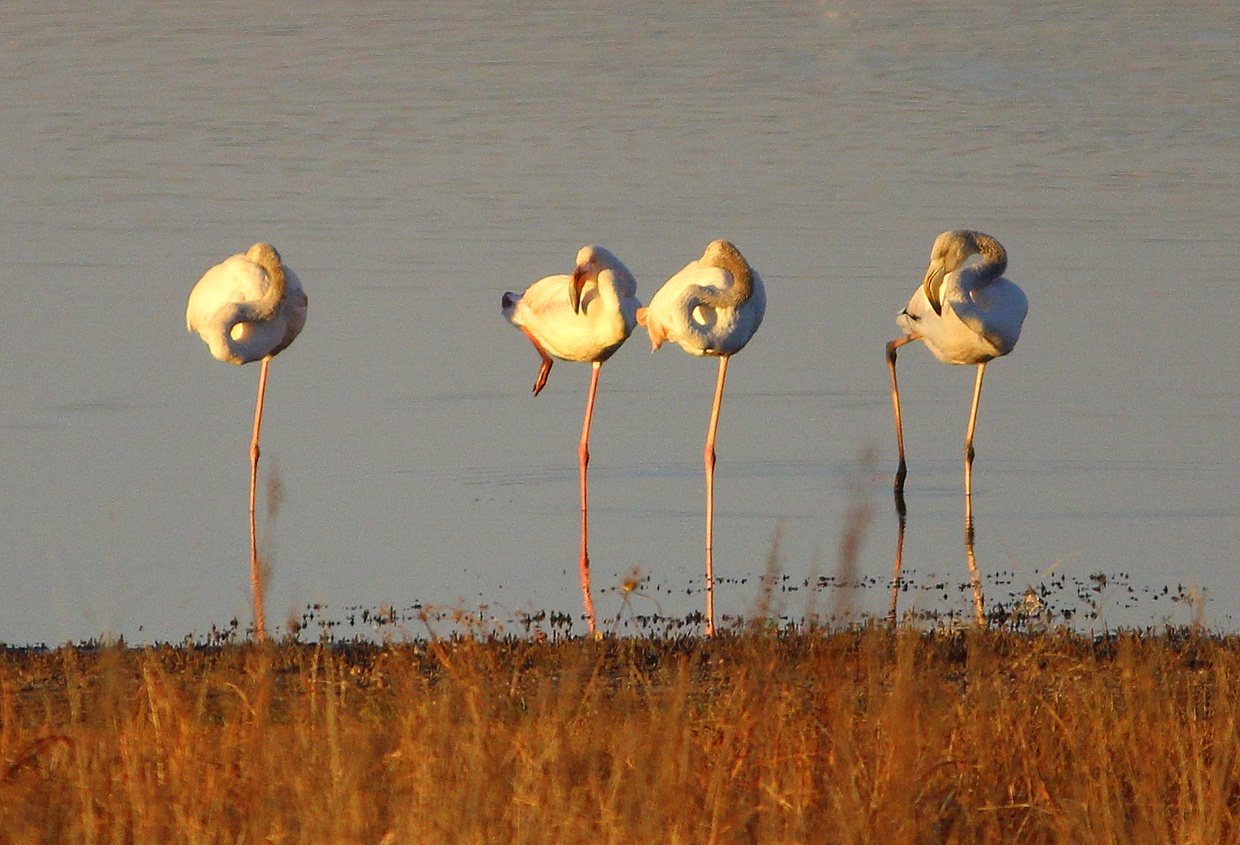 We love Flamingos, Greater and Lesser, we’ve had them both here at Amohela ho Spitskop, hopefully the time has now come for them to return to us and may they again rest awhile. They will never breed here but their shadows linger for a long long while.

They are definitely welcome .