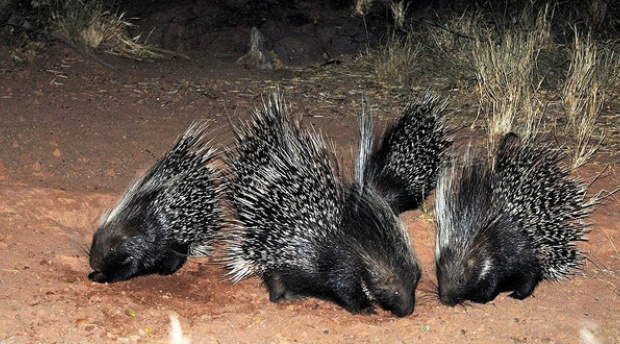 The deadly use of snaring animals is not confined only to our parks. This is a story of how a Porcupine Mum and her unborn young were saved from a wire snare at Amohela ho Spitskop Country Retreat & Conservancy.

Some months ago, whilst driving the perimeters and fence lines on Spitskop, Allen was horrified to find an adult porcupine in a snare. She would have been there most of the night, and the thin wire used had cut deep into her flesh, the wire trapped between her quills. She had struggled and the wicked wire had just cut deeper and deeper into her flesh. We knew it would be a female, as each prickle of porcupines is led by an Alpha female, and she would have walked in front, straight into the snare hung on the fence. Allen phoned me and I grabbed a lot of blankets and, with two staff members, went racing down to the fence line in the other bakkie.   We stayed as quiet and moved very slowly so as to keep her as quiet as possible, and crept up to her with the blankets and wire snippers. Inevitably though she struggled and puffed and finally, with our hands bleeding from her sharp quills, we got the wire snare cut and had her wrapped in blankets. On the way to town we phoned our vet and said we were bringing in a porcupine injured in a snare. Oh, he said, unsurprised, as yet another wounded wild animal from Spitskop was being rushed to him for help. When we got to the veterinary surgery there he was waiting for us. We carried the wriggling porcupine suspended in the blanket into the operating theater, and very carefully!!! unfolded the blanket to reveal the wounded terrified animal. Clive, our vet, examined the deep cuts, and said he would do his best, as he had no idea how much anaesthetic should be used on an adult porcupine, he had never operated on one before. 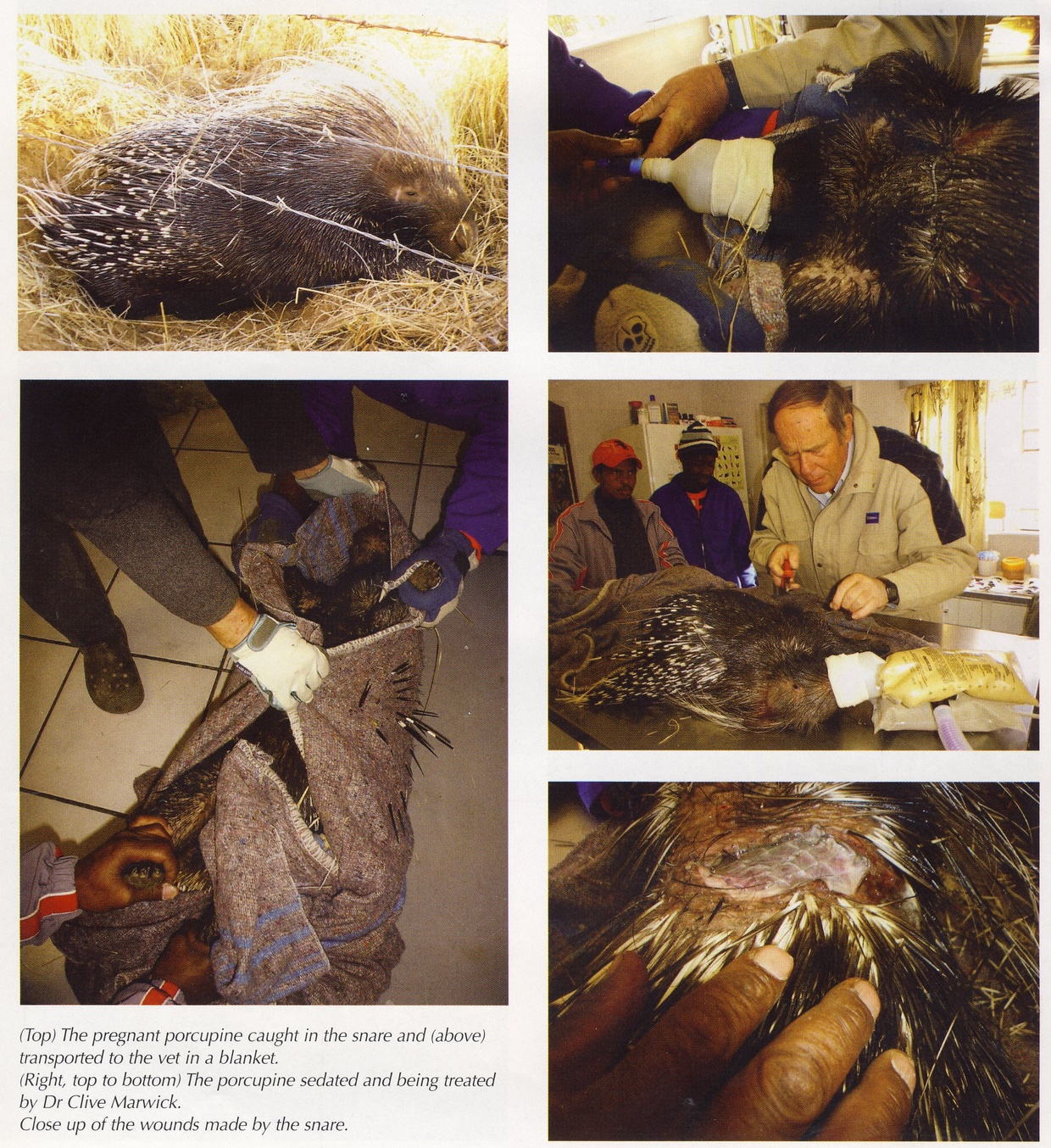 Assisted by us and our two very concerned staff members, he administered anaesthetic, keeping an eye on her breathing. On examination, he felt 2 or 3 tiny baby porcupines inside her womb, all the more reason to rush and get her wounds treated. Some 82 stitches later, still heavily sedated, we carried her back to the bakkie and rushed back to Spitskop, where we carried her to a point we knew there was a large porcupine burrow. This was the most dangerous time for her. Was this the right burrow, would her porcupine family accept her back smelling of anaesthetic, wounds stitched up and covered in gentian violet? Would she survive the operation, would the babies survive and be born??  We lay the blanket down on the ground and withdrew a good distance away from her, and were overjoyed to see her struggle to her feet, sway a bit, and then trundle off up the mountain, in a different direction, we were at the wrong burrow, but she knew exactly where she had to go to get home.

For the next couple of nights we drove out and watched various “clans” making their way around the retreat, but no porky with bare skin and lots of gentian violet. We feared the worst. Then, some 6 weeks later, on  a night drive, there she was, white scars clear and faint gentian violet still visible, with a number of other porkies, happily eating fruit put down for the bees at the bee bath and feeding area ( we feed and water bees but that’s another newsletter!!)  Did the babies survive? We really think so, as she would perhaps also have died if they were still born or not born. An incredible feeling to know somewhere up there in the mountain there were three little baby porcupines waiting for their mum to come waddling home, full of fruit and roots and good wholesome porcupine milk to feed them,  so they can get big and strong and go rooting in the mountain one day.